Governor of BI: the Weakening of Rupiah Still Lower than Other Countries 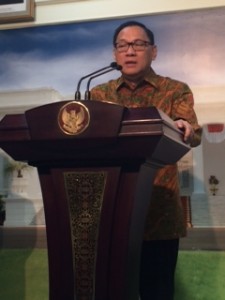 Governor of Bank Indonesia (BI), Agus DW Martowardojo admit, that money market conditions, including rupiah exchange rate, is currently gain of the external pressure, ie normalization policy of the United States (US), and improving the country’s economy. However, compared with other countries, depreciation or weak exchange rate is still lower than other countries.

According to Agus, if the rupiah depreciated 5.7 percent, in the same period the Brazilian currency depreciated by 16.7 percent, while Turkey 13 percent. Likewise, the ASEAN countries, rupiah exchange rate is not worse than Malaysia or Singapore Dollar. Similarly, with the Australian Dollar and New Zealand Dollar depreciating is biger than Indonesian Rupiah.

“So we wanted to convey that among developing countries in the world, Indonesia is occurred depreciation conditions, but it is not as big as other main developing countries “, Agus told to reporters after the meeting limited regarding rupiah exchange rate, in the office of President, Jakarta Wednesday (11/3).

The Governor of Bank Indonesia said the circumstances of the Fed’s interest rate adjustment will take place in the month of June to September. In addition, to watch out for is the Chinese, because in the congress meeting, the national committee has agreed that economic growth in China is estimated 7 (seven) percent.

“This is certainly a number that needs to be watched, because the impact on the world,” Agus said as he mentioned, we also noticed that the world commodities is corrected, where the futures market saw that the eight commodities which are the mainstay of Indonesia, also corrected perhaps to 11 percent in year 2015.

According to the Governor of BI, in general, Indonesia in the fairly good condition, at least in terms of inflation. “We are now comfortable that inflation would lead to 4 percent in 2015 and in 2016 also at least as it, and credit default swaps Indonesia also continued to improve. The term, if a year ago there was in the range of 230, now 130, although yesterday slight increase to approximately 140,” Agus said as he mentioned, it shows that the risk of Indonesia is quite good compared to other developing countries.