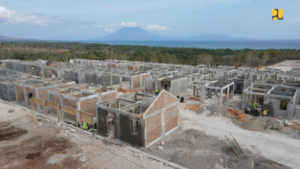 The Government through Ministry of Public Works and Public Housing is currently constructing permanent housing for the victims of Seroja tropical cyclone disaster occuring last April in East Nusa Tenggara.

According to Minister of Public Works and Public Housing Basuki Hadimuljono, the Government is set to construct 700 units of permanent houses in Lembata Regency and 300 units in Adonara, East Flores Regency.

“The current construction progress has reached 27.6 percent in Lembata Regency and 20.5 percent in East Flores Regency,” Basuki said as quoted from the Ministry’s website, Monday (23/08).

The construction is carried out using Simple Healthy Instant House (RISHA) technology, a permanent house with knock down construction so it can be built quickly using reinforced concrete as the main structure.

“We do not just want to rebuild, but we want to build back the permanent houses with a better and safer approach,” the Minister said.

For the record, the constructed permanent houses are type 36 on 108 m2 land and are equipped with basic housing infrastructure, namely clean water supply, sanitation networks, public roads, water drain, and other public facilities. The construction of the houses and their supporting infrastructure is set to be completed within this year.

In addition to the two locations, according to the recommendations of local regional heads to the Central Government, a settlement relocation program was also carried out in Kupang City, Kupang Regency, Alor Regency, and East Sumba Regency. That means  1,922 units have been verified and set to be constructed. (Ministry of Public Works and Public Housing PR/UN) (GWH/LW)