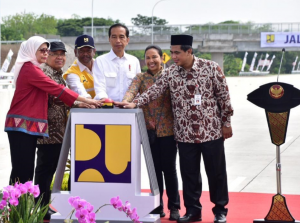 In a bid to prepare the 2018 Christmas and 2019 New Year holidays, Minister of Public Works and Public Housing Basuki Hadimuljono has announced he will inspect the readiness of Trans Java toll road.

Previously, the Government set target of building Trans Java toll road from Merak (Banten province) to Surabaya (East Java province) that spans along 870 km that can be used for the 2018 Christmas and 2019 New Year holidays. In fact, President Jokowi has also conveyed his plan to try the toll road himself in order to calculate travel time from Jakarta to Surabaya.

Only a small work completion is left, such as the installation of median concrete barrier, he said.

In the meantime, Managing Director of state-owned toll road operator Jasa Marga Desi Arryani said that the toll road industry players have put their efforts to complete the toll road constructions in accordance with the Government’s aim to accelerate infrastructure development in the country. (EN/BKP Kementerian PUPR/ES)