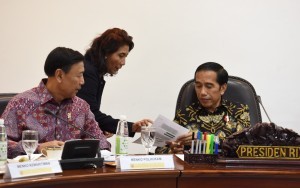 Minister of Maritime Affairs and Fisheries Susi Pudjiastuti shows a document to President Jokowi during a limited cabinet meeting at the Presidential Office, Jakarta, Thursday (5/1). (Photo by: JAY/Public Relations Division)

President Joko Jokowi Widodo reiterated the Governments priority to develop transportation infrastructures aimed at improving connectivity among cities, regencies, provinces, and islands. By improving connectivity, the Government hopes to create equal development and reduce gaps between cities and villages and between regions in the country, President Jokowi said.

The statement was made during a limited cabinet meeting on the Development of Sea Toll with Logistic Posts and Air Bridge at the Presidential Office, Jakarta, on Thursday (5/1).

President Jokowi added that improving connectivity is not merely about building transportation infrastructures but also building logistics system and multi-mode distribution systems. It means that it is not enough for us to only build seaports and airports or to provide air and land transportation to transport basic commodities from and to underdeveloped regions, isolated regions, outermost regions, and border areas, President Jokowi said.

Rather, the President further said, the Government also has to ensure that goods transported through the Sea Toll program or the Air Bridge program can reach rural areas, isolated regions, and outermost islands because people there not only have to buy goods at a much higher price than the price in Java but also often find difficulties in obtaining basic commodities.

Therefore, President Jokowi hopes that the Sea Toll and Air Bridge programs can be integrated not only with industrial zones but also with logistic centers.

President Jokowi went on to say that the Sea Toll and Air Bridge programs are also expected to move economy in the regions because they are expected not only to transport goods to underdeveloped areas, isolated areas, and outermost islands but also products produced there to the rest of the regions in the country.