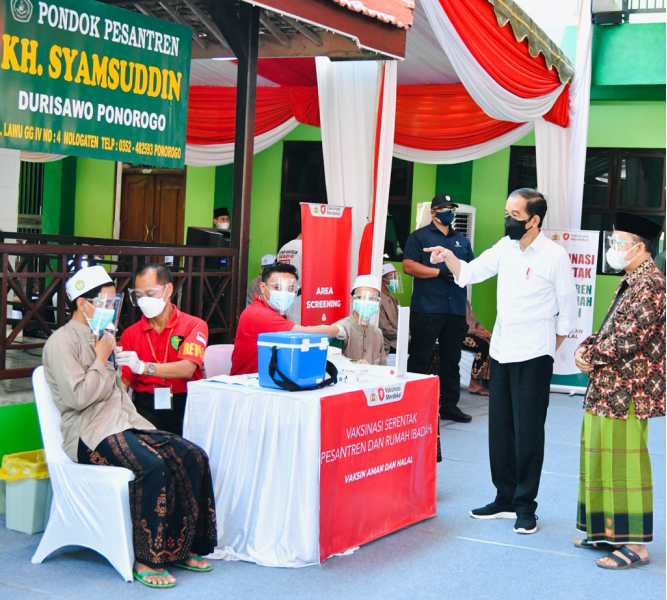 During the inspection, the President stated that the national vaccination target at the end of 2021 is 70 percent, expected to be achieved by each province, including West Nusa Tenggara province that will host the World Superbike international event in November.

“We want at least 70 percent [of the population] in all provinces to have been vaccinated at the end of the year. It would be a relief if it can be achieved before the event, especially in regions around the venue,” he said.

Concerning the event, a representative of West Nusa Tenggara province stated that the province is ready to speed up vaccination process by targeting 15,000 jabs per day to support the World Superbike event.

In the meantime, during a dialogue with regional representatives, the President also ordered that vaccination continues to be sped up to curb the spread of COVID-19 in the country.

According to a representative of Palangkaraya city, vaccination is accelerated in Central Kalimantan province by dividing the region into three vaccination zones.

“The east zone is in Barito watershed area, the central zone is in Palangkaraya and its surrounding area, and the west zone is in Kotawaringin region,” the Palangkaraya representative said, adding that the vaccination record in Central Kalimantan province continues to increase and it is the result of synergy and collaboration of the TNI, Polri, and vaccinators.

“The provincial government, the TNI, the House of Representatives, the Regional Intelligence Agency, and the Port Health Office are used to taking part in mass vaccinations,” the representative added. (BPMI of Presidential Secretariat/UN) (DH/EP)