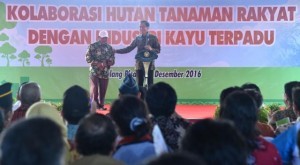 In a bid to improve peoples prosperity who live in forest areas, the Government has allocated 12.7 million hectares of forest areas to be used as social forestry for the period of 2015-2019.

The program will be carried out through permits of management and use over state forest under the schemes of village forests, community forests, customary forests, and partnership forests, President Jokowi added.

However, those who have the rights to get the land are the people, farmers, farmers groups, and farmers’ group association (Gapoktan), President Jokowi said when symbolically  handing over a social forestry permit on Tuesday (20/12), at Barecore Factory of PT Nagabhuana Aneka Piranti-Unit VI, Pulang Pisang Regency, Central Kalimantan.

To make the forests become more productive, the President said that forest areas will be used as plantation, and social forestry will be combined with forest resources processing industry so that the farmers can produce export-oriented products.

This area will be a pilot area for other forests and the program will be carried on. With social forestry, we want to return to the golden era of forestry industry on the basis of community plantation forests, the President stated.

President Jokowi also instructed related parties to immediately build a wood processing factory that will buy the wood from the people. The factory will purchase the wood at reasonable prices; thus the people must sell it at reasonable prices as well. They must not ask for high price. I hope it will be a motor for the economy in Pulang Pisau Regency, the President said.

On that occasion, President Jokowi also said the Government noted that there are 25,863 villages located in the forest areas where 70 percent of its population depend on the forest for their livelihoods.

In fact, around 10.2 million people living in the forest areas are not prosperous and do not have legal aspect (to use) forest resources, the President added.

President Jokowi also asked the people to seriously manage the land given to them and pledged that he would monitor the use of the social forestry from time to time.  I will check it again, whether the land is managed for productive means or not, whether it has been planted or not. Moreover, if I found there is someone who sell the land, you have to be careful because I will know it and follow it, the President concluded.

In the meantime, Minister of Environment and Forestry Siti Nurbaya said social forestry in Central Kalimantan is projected to cover 1.6 million hectares of land.

For the records, on that occasion, President Jokowi handed over Forest for People Business permits for 1,885 hectares land for 183 householders.