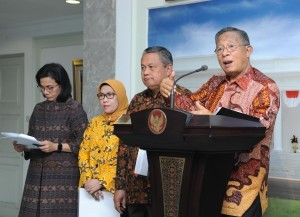 Coordinating Minister for the Economy Darmin Nasution asserted that the 16th Economic Policy Package comprises three main points: an expansion of the tax holiday program, relaxation of the negative investment list (DNI), and the provision of foreign exchange of export earnings from natural resources.

In fact, there were two categories that have never defined as packages. The first one is relaxation of cross-border trade, and the second one is the Online Single Submission or OSS. We have never defined those two as packages since they are considered having more operational/implementation sides, Darmin said when announced the 16th Economic Policy Package, at the Presidential Office, Jakarta, Friday (16/11).

Furthermore, Darmin also said that the current global economic condition is slowing and it is predicted to  remain slow in 2019.

Not to mention policy normalization that are adopted in developed countries, particularly the United States, shows no sign of abating. In this case, Bank Indonesia has made some anticipatory measures, Darmin said while expressing his hope that trade war between the US and China, which has affected Japan to cool down.

Price of commodities particularly oil and fuel is fluctuating, the Fed began to normalize the increased federal funds rate, and there is also capital flow pressures, Darmin added.

As for Indonesia, international analysts has stated that Rupiah rate is too weak, and it is the right time to buy it. For that reason, the Government along with Bank Indonesia and the Financial Services Authority (OJK) announces the 16th Economic Policy Package today, that comprises:

First, the expansion of Corporate Income Tax Deduction Facility or in other words expansion of the tax holiday.

Second, relaxation of the negative investment list (DNI), since the Government eyes more investment be it domestic of foreign investment to enter the country.

On that occasion, Darmin also said that export earnings from natural resources must be deposited in the Indonesian Financial System (SKI). The earnings will not be sold to Bank Indonesia but only deposited in the SKI. The System may be in form of banking accounts, the Coordinating Minister stated.

Exporters can also use the incentives in the designated accounts to import company’s operational needs, pay loans, and other. We are not preventing them to use the money, Darmin added.

To conclude his statement, Darmin explained that three points in the policy package are made to attract more investment. We can not enjoy the benefit of investment instantly, but the policy can increase investor trust to keep investing in Indonesia and boost our capital inflow, Darmin added.