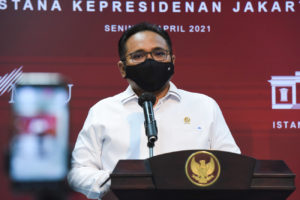 Indonesia awaits confirmation of the Government of Saudi Arabia on this year’s Hajj trip, Minister of Religious Affairs Yaqut Cholil Qoumas has said.

“To date, we have not received confirmation on this year’s Hajj/1443 Hijri,” the Minister said in a Working Visit with Commission VIII of the House of Representatives on Wednesday (02/16).

He went on to say that the Ministry has coordinated with Ministry of Hajj and Umra of the Kingdom of Saudi Arabia in order to secure Hajj quota for Indonesia. However, he added, the Ministry has not received invitation from the Saudi Arabian Government to ink a Memorandum of Understanding (MoU) on the organization of this year’s Hajj.

Once the Saudi grants permission for Indonesia, Hajj quota for this year is those scheduled to go on pilgrimage on 2020/1441 Hijri.

The first batch of Hajj pilgrims is slated to depart on June 5th 2022. Thus, the Government must prepare it within 3.5 months.

The Ministry had also established teams for accommodation, foods, and transportations to give the best services to Indonesian Hajj pilgrims in Saudi Arabia.

He added that the Ministry has been working on improving embarkment services including the Hajj dormitory’s infrastructures and facilities, biometric record of pilgrims, and baggage service.

In addition, the Ministry also wrote books that provide guidance to the rituals of Hajj in pre-hajj manasik during COVID-19 pandemic and recruitment process of Hajj officials for 2022.

The Ministry will also manage the pilgrims upon their arrival in Saudi Arabia namely by providing Hajj Badal (Hajj by proxy) service for those who dies before performing wukuf ritual or for those unable to go to the plains of Mount Arafat on ambulance due to sickness.

On that occasion, Yaqut mentioned three measures to mitigate the implementation of this year’s Hajj.

First, the Ministry will coordinate with the Government of Saudi Arabia for updates on policy and quota of Hajj 2022 for Indonesia.