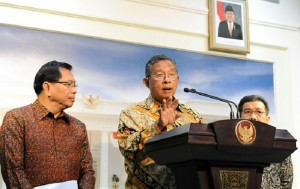 Following the announcement of the first, second, and third Economic Policy Packages, the Government on Thursday (15/10) announced the fourth Economic Policy Package, which consists of three policy packages, including the one related to the wage system, the follow up of the Smallholder Business Credit (KUR) program, and credit for Medium and Small Enterprises for exports in a bid to prevent lay offs.

We announced those three packages today. We hope they are easily comprehended by the public, business world, and especially this fourth Policy Package, the Government aims to provide more job opportunities and to give ease for business world and investors in providing job vacancies, said Cabinet Secretary Pramono Anung in his briefing before the announcement at the Presidential Office on Thursday (15/10).

In the meantime, Coordinating Minister for the Economy Darmin Nasution said that to support efforts to provide job opportunities, the Government would set a simple formula to set minimum wage, especially provincial minimum wage.

He added that the state would assist by launching the safety net program, one of which by creating a formula to determine a minimum wage. He also said that the Government would ensure that labors would not be given a low wage and businessmen would get certainties in running their businesses.

With this policy, we can ensure that labor wage increase every year. I heard a rumor that it would increase once in five years. Its wrong. It increases every year with measured increase, the Minister said.

As for the minimum wage, Darmin said that the state would also help the people through social policies such as the Indonesian Smart Card, the Indonesian Health Card, and many others, all of which are also related to the safety net program.

In the meantime, regarding the decent living standard (KHL), Darmin said that the Government would facilitate and promote dialogs between businessmen and labors in order not to waste more energy and time.

The concept of this wage formula is that decent living standard that has been practiced so far is based on methods and agreements that have already been made. So, this formula is used  as a base to set minimum wage in a province. During the ongoing year, this is the base for the calculation of wage next year and this formula will be implemented soon, he added.

So if the inflation is 5 percent and the economic growth is, lets say, 5 percent, that brings the total of 10 percent. That means, next year, in that particular region, the minimum wage is  the minimum wage this year added with 10%. The calculation for next years rise is based on the same formula, he added.

Darmin also considered that setting the wage with such a formula could be considered fair because in other countries, especially developed countries, economic growth is not only determined by labors but also by businessmen and capital owners. (FID/DID/JAY/ES)/Sy.