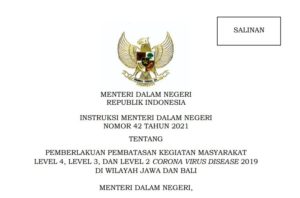 In the meantime, six regencies/cities experience setbacks. Purwakarta regency has to enforce Level 4 PPKM after enforcing Level 2 PPKM. Cirebon regency and Brebes regency have to go from Level 3 to Level 4, while Wonosobo regency, Tegal regency, and Bondowoso regency from Level 2 to Level 3

The following is the list of regencies/cities enforcing Level 4, 3, and 2 PPKM in Java and Bali: