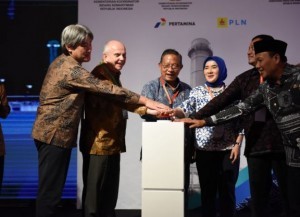 Coordinating Minister for the Economy Darmin Nasution, Managing Director of Pertamina, and other officials press the button marking the start of construction of Java 1 PLTGU, in Karawang, West Java, Wednesday (19/12).

The power plant will have the capacity of up to 1,760 megawatt (MW) and use 400 million cubic feet of Liquefied Natural Gas (LNG) per day sent directly from Tangguh Gas Field in Bintuni Bay, West Papua.

According to Darmin, the power plant is important to improve reliability of the Java-Bali power system and will also become the first integrated power plant in Asia and the largest in Southeast Asia that combines the LNG business and independent power producer business (IPP).

We should be grateful and proud of this important project (the Java-1 PLTGU), or more commonly called the IPP Jawa-1 PLTGU project – the first integrated power plant in Asia and the largest in Southeast Asia, Darmin said, adding that the Government has set this Java-1 PLTGU project not only as a National Strategic Project, but also a priority project from the Committee for the Acceleration of Priority Infrastructure Provision (KPPIP).

Therefore, the KPPIP fully supports immediate completion of its construction. In the process of preparing for Financial Closing, the KPPIP has facilitated settlement of spatial suitability, land acquisition, and permit issuance, Darmin said.

Gas infrastructure is needed to support the development of gas power plants throughout Indonesia, he said.

The Minister also called on state-owned oil and gas company PT Pertamina, state-owned electricity company PT PLN, and all parties involved to carry out this project in accordance with the planned steps, so that the development will run smoothly and meet the set time.

Meanwhile, PT Pertamina Managing Director Nicke Widyawati said that the gas power plant is one of the Governments policies to boost the use of clean energy until 2025. The project is a strategic measure that will materialize the Governments commitment for the use of new and renewable energy in the future, she said.

Nicke also expressed belief that this project will create a vast multiplier effect for the economy in Karawang, Bekasi, and the surrounding areas, one of which through the creation of job opportunities for 5,000 people during the construction period and approximately 200 people when the power plant is in operation.

More than 20 companies – both domestic and foreign companies – are involved in the project, with a total investment value amounting to US$1.8 billion or around Rp26 trillion.

(Public Relations of Coordinating Ministry for the Economy/ES)