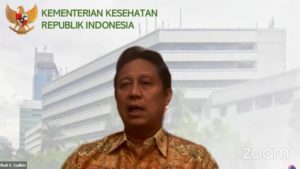 Minister of Health Budi G. Sadikin in a virtual press statement regarding the development of the public activity restrictions (PPKM), Monday (13/9). (Source: Screenshot of Coordinating Ministry for Maritime Affairs and Investment’s Youtube Channel)

In a bid to prevent the entry of new variants of COVID-19 virus, the Government is tightening entry borders throughout the country, Minister of Health Budi Gunadi Sadikin has said.

“The Government has decided to tighten all the country’s entrance posts by completing and tightening the quarantine measures, whether by air, sea or land,” Budi said in a virtual press statement regarding the development of the public activity restrictions (PPKM), Monday (13/9).

In addition, the Government is also closely monitoring the development of new variants of the Corona virus around the world.

“These three variants are currently under research, how do they behave, the rate of transmission, and whether they can avoid naturally occurring antibodies or [antibodies produced in response to] vaccination. And until now there has been no definite research results,” he said.

The Minister further emphasized that those three variants have not been detected in the country. To detect the presence of a new variant of SARS-CoV-2, the Government also continues to increase efforts to test whole genome sequencing (WGS).

“We are also strengthening the whole genome sequencing (WGS) lab network so that we can quickly identify these new variants,” said Budi.

He went on to explain that currently there are 21 laboratory networks in Indonesia that can carry out adequate testing. Through the lab network, 1,866 genome sequences have been carried out every month, bringing the total from January to August to 6,161 genome sequences.

“Last year, in one year we only did 340 genome sequencing. Now, until August, 6,161 genomes have been sequenced,” he said.

Meanwhile, Coordinating Minister for Maritime Affairs and Investment Luhut Binsar Pandjaitan said that international travelers from abroad must meet the requirements of having received a complete dose of vaccination, performing PCR tests three times (D-3 before departure, upon arrival, and on the seventh day of arrival) and quarantine for eight days. In addition, there are also restrictions on entrances for ease of supervision.

“So, entering the country by air only through Cengkareng Airport and Manado Airport. As for Bali, we are considering to open the international entrance in the next 1-2 weeks, “said Luhut. (TGH/UN) (EST/MMB)