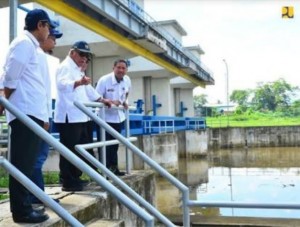 In a bid to support food production in Garut regency in West Java province, Ministry of Public Works and Public Housing is building Copong dam and constructing a 13-kilometer primary irrigation system in the regency.

The dam is expected to increase and maintain water level of Cimanuk River so that the water can flow to the irrigation channels during the dry season.

The dam and irrigation project in Leuwigoong Irrigation Area are expected to irrigate rice fields in 11 sub-districts in the regency covering an area of 5,313 hectares. The new infrastructure is projected to improve Garut farmers crop index from the current 176% to 250%, meaning that the farmers can plant rice twice a year and harvest once a year.

For the record, following flash floods that hit Garut area in 2016, Ministry of Public Works and Public Housing has revamped Cimanuk river and Cimanuk creek with length of 5 kilometers.

The Ministry has also set up the Cimanuk River flash flood memorial to commemorate the victims and to increase public awareness to always take good care of watersheds area for their safety to prevent similar disasters in the future. (Public Communication Bureau of Ministry of PUPR / EN)