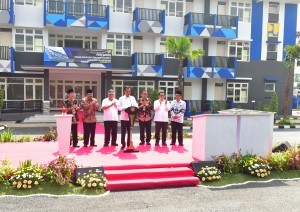 President Jokowi accompanied by a number of officials inaugurates low-cost apartments for students of Tulungagung STKIP and IAIN, in Tulungagung, East Java, on Friday (4/1). (Photo by: Rahmat/Public Relations Division)

The Government has built 300 low-cost apartments in 2018, 45 of which are built in East Java Province, President Joko Jokowi Widodo said.

President Jokowi, who visited the rooms at Tulungagung STKIP apartment, considered that such facilities were indeed needed for students. I entered the rooms earlier, I think the quality of the work is also very good, the President said.

As for the Ngujang II Bridge, it stretches 220 meters with a width of 9 meters, has a steel frame type, constructed in 2018. This bridge is part of the Tulungagung outer ring which was built to overcome traffic congestion on the national road that crosses the city of Tulungagung. (UN/RSF/RAH/OJI/ES)