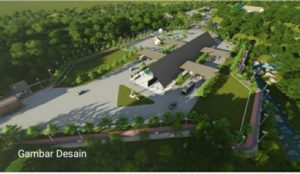 Source: PR of Ministry of Public Works and Public Housing

Minister of Public Works and Public Housing Basuki Hadimuljono said that the development of the border area is in line with the directives of President Joko “Jokowi” Widodo in supporting the socio-economic activities of communities at Indonesian borders.

“The PLBN is not only an entry gate but also part of regional economic growth center that can improve the welfare of communities living in border areas,” Basuki said as quoted by the Ministry’s website, Wednesday (09/22).

The data recorded by the Aruk Immigration Checkpoint (TPI) in March 2020 shows that there are 100-150 people passing through Jagoi Babang PLBN per week.

The Jagoi Babang PLBN has a strategic value as the gate of Indonesia because it is only 60 kilometers away from the State Capital of Sarawak, East Malaysia which can be reached in 1.5 hours. Meanwhile, the distance from Pontianak to the PLBN is 270 kilometers or about seven hours by car.