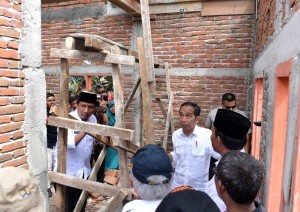 For the record, RISHA applies construction technology to build earthquake-resistant houses for the residents of Lombok who need to rebuild their houses after the last quake. RISHA is designed to be able to withstand large quake shocks and is relatively easy to build. RISHA offers high-quality house that the Lombok residents need today.

During the visit, the President witnessed a number of houses built using RISHA technology. The structure of the building column and the roof frame in several houses were almost completed.

President Jokowi asked one of the house owners about the reason for choosing RISHA technology to rebuild his house after the quake. The owner said that he wants the construction of his house to be completed quickly so he can get his house ready as soon as possible.

The President went on to say that the Government gives choices to Lombok residents whether to build RISHA or conventional house. He reminded the residents that whatever choice that they make, the construction of the building shall be resistant to earthquake shocks.

“The residents are free to choose the RISHA or the conventional house” President Jokowi said.

“The residents can disburse the funds with only one procedure,” the President concluded.