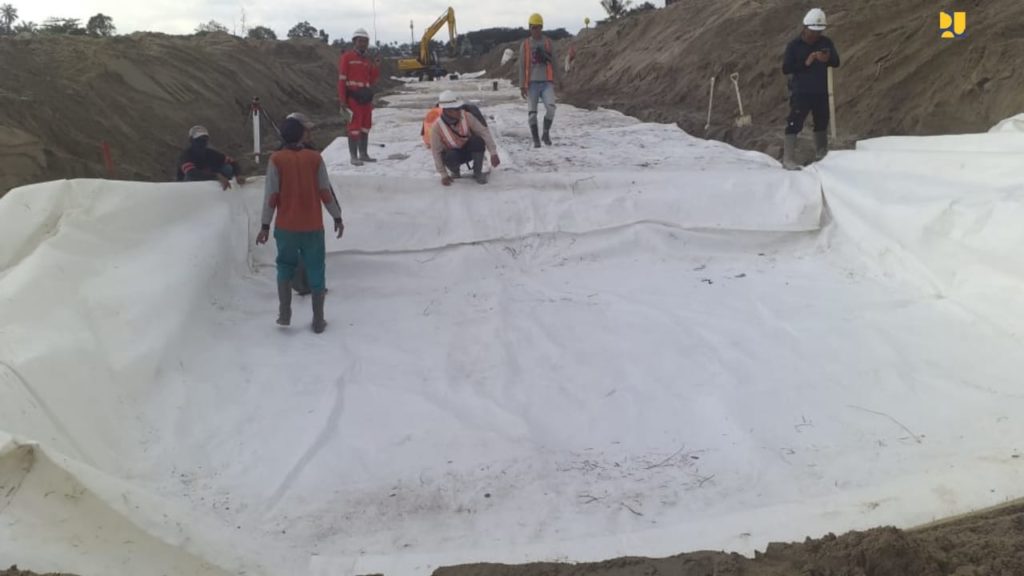 The process of building a temporary embankment in North Luwu. (Photo: Ministry of PUPR)

Ministry of Public Works and Public Housing has announced it continued to assist the handling of flash flood emergencies in North Luwu Regency of South Sulawesi during the emergency response period declared by the Regional Government from 14 July to 12 August 2020 as well as post-disaster.

The flash flood occurred on Monday (13/7) caused by the overflow of the Masamba, Radda, and Rongkong rivers due to extreme rainfall upstream of the river.

As a quick step in handling the emergency, Minister of Public Works and Public Housing Basuki Hadimuljono has instructed that the sand mud cleaned from the settlement be collected and put into geobags to be used as temporary embankments on the banks of the three rivers.

“For permanent handling, river normalization will be carried out by dredging, repairing river channels and constructing river embankments with a permanent structure,” the Minister said.

The Ministry through the Pompengan Jeneberang River Basin Center is also working on the normalization of the three rivers. The Radda River normalization work has started since 25 July 2020 with a total length of 1,021 meters handled until 11 August 2020.

In the meantime, Head of the Pompengan Jeneberang River Basin Center Adenan Rasyid stated that the construction of geotextile-reinforced embankment with a permanent structure on the left side of the river flow began on 30 July 2020.

In the Masamba River, 2,577m temporary river embankment work has been carried out and a geotextile-reinforced embankment is also carried out on the right side of the river flow with a permanent structure, including 328m (layer 1), 208m (layer 2), and 60m (layer 3). A total of 6 excavator units, 1 unit of bulldozer, 5 dump trucks were deployed.

A total of 8 excavators and 3 bulldozers were deployed to excavate the Rongkong River sediment and 2 excavator unit for geotextile installation.

The Ministry is also assisted by PT Brantas Abipraya and PT Hutama Karya which handled the construction of Baliase Irrigation Area near the disaster site, making it easier to mobilize heavy equipment and personnel. (BKP Kementerian PUPR/EN)