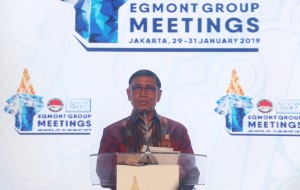 Indonesia has fulfilled the satisfying criteria of the Financial Action Task Force on Money Laundering (FATF), Wiranto said at the 2019 Egmont Meeting Group in Jakarta, Wednesday (30/1).

According to the Minister, Indonesia has a well-developed and strong government system to effectively combat money laundering and terrorist financing, shown in the results of the Indonesia Mutual Evaluation Report published by the APG (Asia Pacific Group) in September 2018.

The result is that based on the FATF Recommendation, we are ranked 29 and it is considered compliant with Immediate Outcome 6 at a substantial level, Wiranto said.

For Indonesia, the Minister continued, the meeting plays a very strategic role because it does not only to enhance Indonesia’s role in the organization but also strengthen Indonesia’s efforts to fulfill its own commitments by becoming a FATF member.

Wiranto said he is also pleased that Indonesia could collaborate with the Egmont Group. which plays an important role in the exchanging data process and information about money laundering and terrorist financing among jurisdictions.

We continue to face challenges that are growing into more sophisticated schemes of money laundering and terrorist financing. Therefore, a collaboration between the state and jurisdiction is an absolute necessity in surmounting these challenges, he added.

The Minister further said that the Government also needs to further increase cross-border information sharing between institutions by all relevant parties, such as the FIU (Financial Intelligence Unit), law enforcement agencies and the private sector to detect actors behind the scenes by carried out the “follow the money” method to minimize terrorist threats. (Humas Kemenko Polhukam/ES)