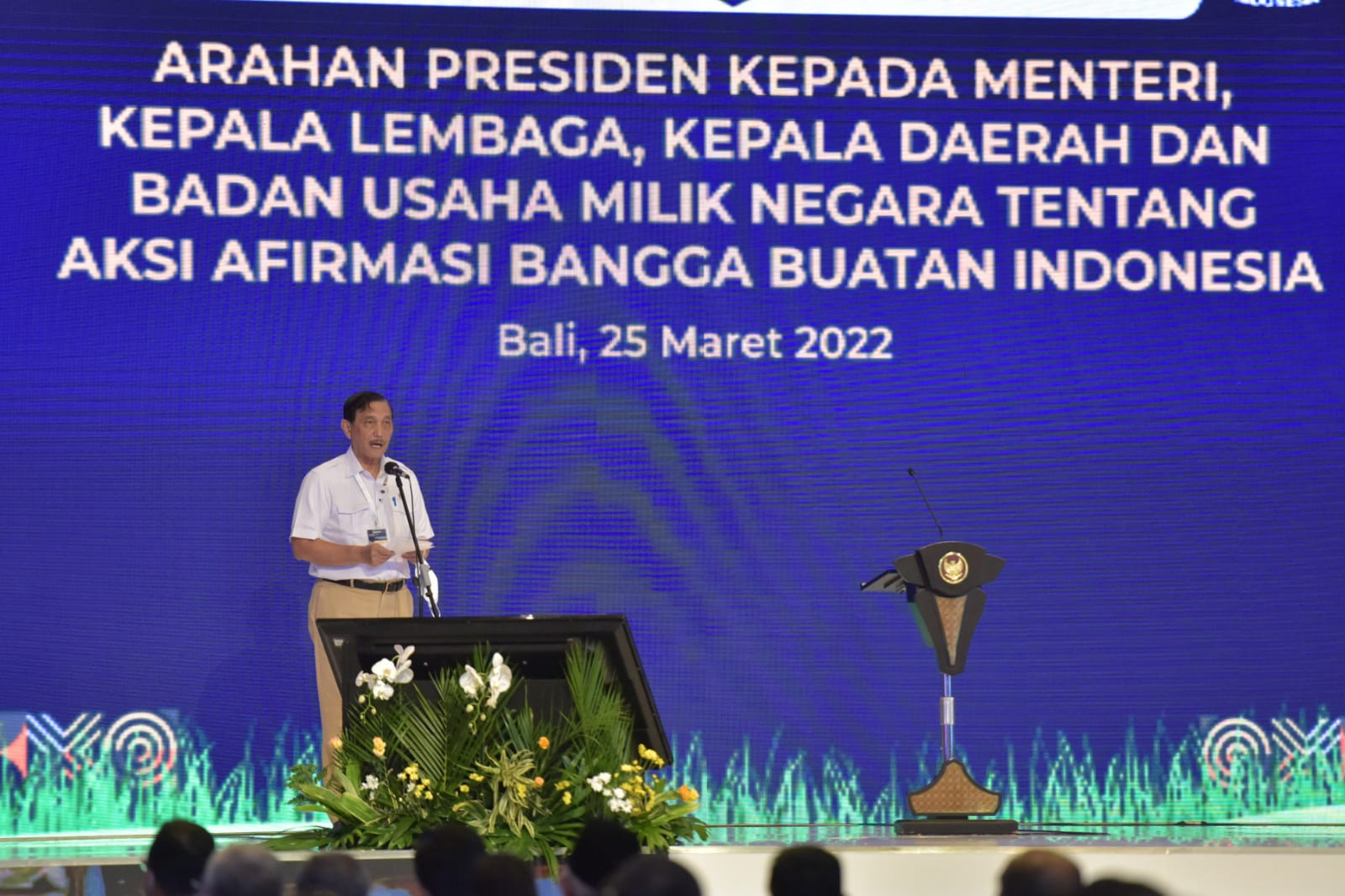 Coordinating Minister for Maritime Affairs and Investment Luhut Binsar Pandjaitan on Directives of President to Ministers, Heads of Institutions, Regional Heads and Heads of State-Owned Enterprises on Affirmation Action of Proudly Made in Indonesia, Friday (03/22), at the Grand Hyatt Nusa Dua, Bali. (Photo by: Agung/PR)

Coordinating Minister for Maritime Affairs and Investment Luhut Binsar Pandjaitan has said that the affirmation of domestic products spending is a concrete manifestation of prioritizing domestic interests, as well as efforts to reduce import spending.

This effort is a collaboration of 34 ministries/agencies and 512 regional governments and SOEs to create an ecosystem to continually prioritize domestic products.

“Government spending for domestic products in 2022 is targeted at Rp400 trillion,” said Luhut at an event of the President’s Directives to Ministers, Heads of Agencies, Heads of Regional Governments, and Heads of State-Owned Enterprises on Affirmation Actions of Proudly Made in Indonesia, Friday (03/25), at the Grand Hyatt Nusa Dua, Bali.

In his report, Luhut unveiled that this figure will be increased to Rp500 trillion in April and must be completed by May 31, 2022 so that the figures on economic growth can be seen this year.

Prior to this event, a business matching activity has also been held on March 22-24, 2022 in Nusa Dua, Bali. The results of this activity have reached more than Rp204 trillion. It is hoped that with a one-week implementation in April in Jakarta, it will be able to reach Rp400 trillion.

Data from Statistics Indonesia (BPS) shows that if we spend Rp400 trillion (1.61% to 1.7 percent), it will create nearly two million additional jobs in this country, he added.

Luhut said that this action was also considered capable of creating demand for domestic products and strengthening supply through industrial development capacity and new investment. In addition, it is also able to develop a government marketplace as the main market.

He went on to say that to support the Government’s spending commitments, a team to increase the use of domestic products (P3DN) has been established, which is currently available in 25 ministries and agencies, 8 SOEs, and 103 regional governments.

“Furthermore, the Government Goods/Services Procurement Policy Institution (LKPP), Ministry of Industry, Ministry of Home Affairs, and Ministry of Finance have made improvements to the digital ecosystem of government spending. This is needed to support the acceleration of the use of non-cash payments via government credit cards with QRIS,” he continued.

Luhut revealed that with the government credit card, it would be able to reduce costs by approximately 20-30 percent.

“So, our country will become more efficient in the future,” he said.

In terms of supply, Luhut reported that the e-katalog has shown 200,000 products from previously only around 50,000 products. Luhut added that the Government has set a target to reach 1 million products by the end of 2022.

“To support this, Ministry of Home Affairs, Ministry of Finance, Ministry of Industry, the BPS, and the LKPP need to collaborate and integrate government goods and service codes. So, all products will be integrated with the same code. That way, as you saw on TV, we will know how much computers needed by the Government this year, and so on,” he added.

Drafts of Presidential Instruction for the Acceleration of Increasing the Use of PDN and the Presidential Decree on Institutional Strengthening of LKPP have also been drawn up.

Luhut explained that to strengthen the legal basis, the BPKP, the Attorney General’s Office, the LKPP, and the National Police had established a system of supervision and assistance for implementing PDN spending, as well as providing early warning if there was a potential violation in it.

“So, all our steps from time to time are always audited by the BPKP. No one can avoid this. We must learn to be honest and loyal and work with heart,” he said.

For this reason, the Coordinating Minister mentioned several things on this event. First, monitoring the acceleration of the realization of the PDN spending no later than May 31.

“I repeat, on May 31 all business matching must be completed so that this figure can be included in our growth rate this year. Otherwise, this figure will no longer be included. With this measure, we can add 1-1.7 percent of our economic growth from the predicted 5.2 percent to around 6 percent,” said Luhut.

Next, requesting priority for PDNs that already have Intellectual Property Rights of the Financial Audit Board (BPK) to continue the shopping process through the e-contract mechanism. Then, accelerating the development of schemes and regulations for PDN spending incentives and import spending incentives.

Regarding the loan agreement, Luhut added, to finance infrastructure development, it is necessary to review and audit from the BPKP and ensure that the bilateral loan agreement prioritizes PDN and requires knowledge transfer or technology transfer of foreign experts to the country.

Next is that the business matching process is routinely carried out both at the national and sectoral levels in order to achieve transactions of more than Rp400 trillion this year. Then, the BPKP, the LKPP, the Attorney General’s Office, and the National Police are under their supervision to carry out an early warning system, including to take action.

“We also invite the Corruption Eradication Commission (KPK) to get involved. So, all institutions in this Republic are integrated. I believe that if we are integrated, we can work together,” said Luhut.

Luhut added that the next thing is related to the support for the supply of goods and services for MSMEs. It is necessary to prioritize credit distribution for MSMEs that have received procurement contracts. Finally, to continue this action, the Government proposes that every ministry/agency, regional government, and SOE to devise a roadmap for reducing imports by 2023.

“In addition, the supports from Ministry of Finance, the National Development Planning Agency (Bappenas), the BPKP, and the LKPP are needed to list a PDN component in spending,” he said. (FID/AIT/ST) (EST/HD/MUR)