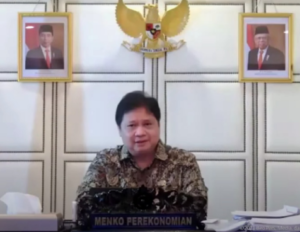 The Government continues to renew its commitment to roll out social protection program (Perlinsos) for the public during the implementation of public activity restriction (PPKM), according to Coordinating Minister for Economic Affairs Airlangga Hartarto.

“As many as 10 kilograms of rice [per family] has been fully distributed targeting 28.8 million families,” Airlangga said in a press statement on the realization of the social protection program, Monday (30/8).

Meanwhile, the 2021 salary/wage subsidy assistance for workers/laborers has been disbursed to 2.09 million recipients.

“For the 2021 wage subsidy assistance, Rp1 million per worker has been completed and fully disbursed to 2.09 million workers,” Airlangga said.

As of 11 August 2021, the Productive Presidential Assistance (Banpres) for Micro Businesses reached Rp14,21 trillion and was received by 11.84 million micro business players (92.52 percent of the total budget of Rp15.36 trillion).

On that occasion, the Minister also pointed out the realization of the National Economic Recovery Program (PEN) which reached Rp340.84 trillion or 45.8 percent of the ceiling.