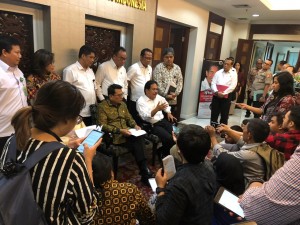 The team for Acceleration of Agrarian Conflict Resolution (TPPKA), formed in 2016, has received 666 reports of agrarian conflict cases, covering an area of ??1,457,084 hectares, and affecting at least 176,132 families.

Initially, some of the cases reported by residents were addressed to Ministry of State Secretariat or Cabinet Secretariat. Then, those cases were forwarded to the Presidential Chief of Staff and handled by TPPKA. In addition, TPPKA also receives letter and e-mail complaints as well as direct complaints.

“TPPKA analysis reveals that most of the agrarian conflicts were due to mal-administration of land services, overlapping permits/concessions on land and natural resources, unfair compensation processes and protracted settlement due to approaches that were merely formal legal, and so on,” the Presidential Chief of Staff Moeldoko said during the TPPKA Ministerial Meeting, at Bina Graha, Jakarta, Wednesday (12/6).

Based on the aforementioned cases, there are 413 cases that have sufficient supporting information for follow up and 253 cases that do not have enough supporting information yet. Based on the TPPKA analysis, at least 167 cases can be resolved in the short term, 92 cases can be resolved in the medium term, and 154 cases are predicted to take longer term to resolve. The meeting results in accelerating the short term cases resolution.

Moeldoko stated that the Government is committed to accelerating the resolutions of the agrarian conflicts. One of the steps taken was cross-ministries and cross-agencies coordination. Each ministry has appointed responsible officials for the coordination.

He also submitted a digital document containing a list of cases along with all supporting data to the relevant ministries/institutions and said that the Government is committed to establishing agrarian justice and that the meeting is a big step to realize it.

On the occasion, Minister of Agrarian and Spatial Planning/Head of the National Land Agency Sofyan Djalil reaffirmed his commitment to resolving the agrarian cases, including complex cases such as cases related to Governments assets. The Minister expressed his optimism that the cases can be resolved through cross-ministries and cross-agencies coordination.

“Several conflicts, such as Teluk Jambe and Karawang (cases) were successfully resolved. Indeed, there are still (unsolved) complex conflicts. However, the pattern of coordination among ministries that were discussed today brought light to the problem,” Sofyan said.

In the meantime, Minister of the Environment and Forestry Siti Nurbaya echoed the importance of cross-ministerial and cross-agencies coordination.

“Through the coordination with Ministry of Home Affairs, the Provincial Government plays an important role in initiating agrarian conflicts resolution. The technical details will positively encourage the plan implementation for resolving agrarian conflicts,” Siti Nurbaya said.

The Minister also said that the coordination will set a higher chance of resolutions to the existing issues of indigenous people lands.