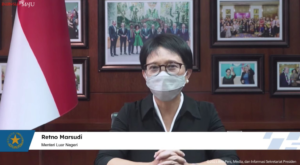 The Government affirms its commitment to work hard to secure vaccine supply for the implementation of national vaccination drive, according to Minister of Foreign Affairs Retno L.P. Marsudi.

“The Government continues to work hard to meet vaccine demand for all Indonesian people. As of yesterday, Indonesia has used more than 100 million doses of vaccine. Based on the number of vaccine doses administered to the people, Indonesia ranked 7th globally,” the Minister said in a press statement on the arrival of the AstraZeneca vaccine provided by the Australian Government, Thursday (2/9).

According to Retno, the Government also continues to speed up the vaccination drive to achieve herd immunity targeting 208.27 million people with the support of all elements of the nation.

“To that end, let’s get vaccinated and continue to comply with health protocols. Both vaccine and adherence to health protocols will be a strong asset for Indonesia to continually reduce the rate of virus transmission,” she said.

“To date, at least 140 countries have vaccinated 10 percent of their citizens, including Indonesia,” she added.

The Minister further said that the surge in COVID-19 cases was still occurring, including in regions and countries that have previously experienced a decline in cases. Therefore, she urged all parties to cooperate in maintaining the downward trend in cases occurring in the country.

“The number of active cases recorded already below 200 thousand. The cooperation between the Government and all people of Indonesia to keep the number of cases from re-increasing is key,” she remarked. (SLN/UN) (RIF/MMB)