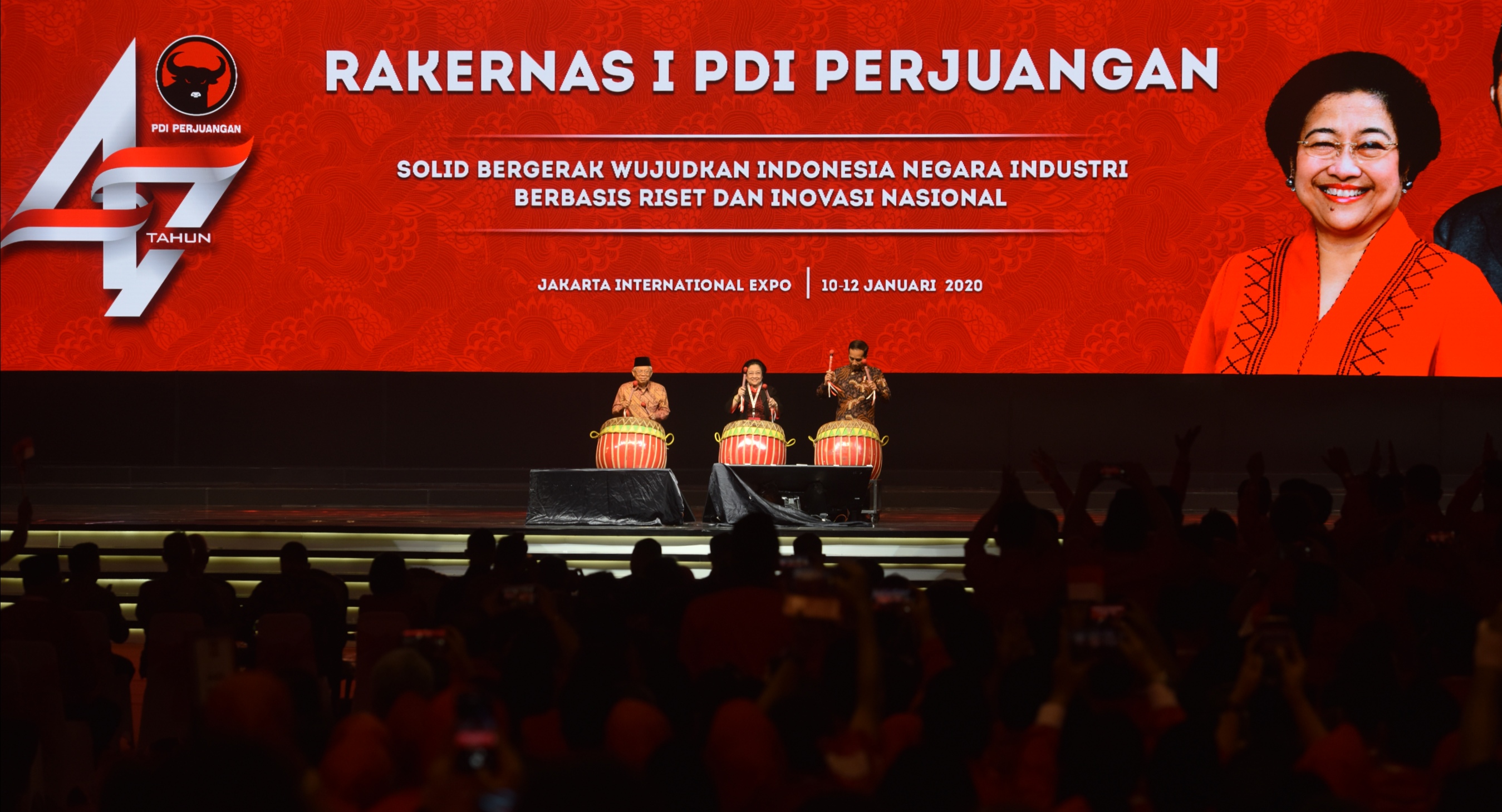 President Jokowi beats a drum along with PDI-P Chairwoman Megawati Soekarnoputri and Vice President Ma’ruf Amin, to officially open the 1st National Working Meeting (Rakernas) and the commemoration of the 47th Anniversary of the Indonesian Democratic Party of Struggle (PDIP) at Jakarta International Expo (JIExpo) in Kemayoran, Jakarta, Friday (10/1). (Photo by: PR / Ibrahim)

“Indonesia always exports raw materials, while it is better to process and consume them through downstream industry or domestically,” President Jokowi said in his remarks at the 1st National Working Meeting (Rakernas) and the commemoration of the 47th Anniversary of the Indonesian Democratic Party of Struggle (PDIP) at Jakarta International Expo (JIExpo), Jakarta, Friday (10/1).

According to the President, the total planted area of oil palm in the country has reached 13 million hectares which can produce around 46 million tons of palm oil per year.

“We must put an end to crude palm oil (CPO) exports and start to make it into semi-finished or finished goods. Otherwise, we will be played by the market,” the President said, adding that Indonesia has implemented the Biodiesel Program 20% (B20) and the B30 program.

“If we increase the portion of diesel blended with CPO from 20 percent (B20) to 30 percent (B30), we are able to save Rp110 trillion per year, not to mention if we can jump to B50 which will make us save around Rp200 trillion,” President Jokowi said.

The President further said that the Government has imposed a ban on nickel ore exports since January this year, considering that it could be turned into a lithium battery to be used for electric cars.

President Jokowi said that economic transformation is difficult. However, the country should have a big economic and business strategy in terms of devising a long-term development formula that aims to stop Indonesia as raw materials exporter.

“The Government is working on research regarding lithium-ion battery innovations and it is expected that within two to three years ahead we can produce lithium battery,” the President added.

In the meantime, the Government also plans to stop exporting raw materials for other commodities, including bauxite, tin, coal and copra.

“We also almost complete research on the use of coconut oil mixtures with catalytic hydrogenation to produce aviation fuel (avtur) so that we can utilize them for all airplanes in the country,” the President said.

The point is, the President continued, as the country’s founding father Bung Karno said in his three-concept, Trisakti; we must be independent in the economic field so that we will not easily be pressured by anyone and we must be politically independent, and politically sovereign.

“That was what Bung Karno taught us, Trisakti: sovereign in politics, self-reliant in economy and distinctive in culture,” President Jokowi said.