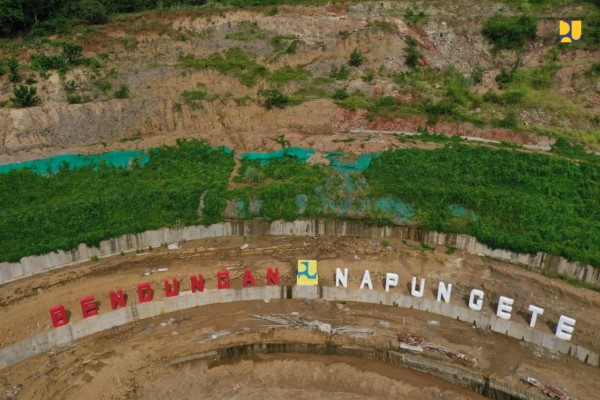 Previously, the province’s Raknamo and Rotiklot dams have been completed and inaugurated by President Joko “Jokowi” Widodo, respectively in 2018 and 2019.

The Napun Gete Dam and the Banten’s Sindang Heula Dam will be inaugurated in the near future, following the inauguration of Tukul Dam in Pacitan, East Java and Tapin Dam in South Kalimantan on 14 and 18 February.

The impounding of the Napun Gete Dam has started since last December 2020, currently, several finishing works are also being carried out.

Minister of Public Works and Public Housing Basuki Hadimuljono ordered that the dam be completed faster to support national water and food security.

“Water availability is the key to development in East Nusa Tenggara, due to its lower rainfall than other regions. For this reason, it is necessary to build many dams and reservoirs to overcome the crisis of water needed for drinking water, agriculture, livestock, and others,” the Minister said, as quoted from pu.go.id page.

Currently, the progress of replenishing the water has reached 40 percent of the total capacity of 11.2 million cubic meters. The dam, which has an inundation area of ​​99.78 hectares, is planned to irrigate an irrigation area of ​​300 hectares. It is expected that the completion of this dam will stimulate economic recovery after the COVID-19 pandemic, especially in the agricultural sector.

Apart from irrigation, the multifunctional dam also functions as a provider of raw water in Sikka Regency with 214 liters per second, flood control of 219 cubic meters per second, and potential for a power plant of 0.71 megawatt. This dam also serves as conservation and tourism areas so that it can help the surrounding communities to improve their welfare.

The dam construction, that is funded by the State Budget amounting to Rp880 billion, carried out by the contractor PT Nindya Karya (Persero) with an implementation period started in January 2017. During the current pandemic, dam construction is still proceeding in order to maintain the sustainability of the economy, especially by providing employment for contractors, consultants and, construction workers.