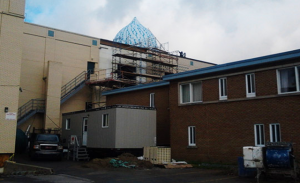 The Government of the Republic of Indonesia through its Ministry of Foreign Affairs condemned the shootings at a mosque that killed five people, at the Centre Culturel Islamique du Quebec, Quebec City, Ottawa, Canada, on Sunday (29/1) local time. “Indonesia condemn the shooting incident at a mosque in Quebec City, on Sunday, 29 January 2017,” said a statement from the Ministry of Foreign Affairs of the Republic of Indonesia uploaded in its twitter account (@Portal_Kemlu_RI), Monday (30/1).

Indonesian Ambassador to Canada, Teuku Faizasyah, in Ottawa, said that he immediately contacted the police in Quebec to ensure the safety of Indonesian citizens who live in the area around the mosque. “So far, we have not obtained information regarding the identity of the victims. It is our hope that Indonesian citizens in Quebec are safe and sound,” the Ambassador said.

The Embassy of the Republic of Indonesia (KBRI) in Ottawa has issued an appeal to Indonesian citizens in Canada following the shooting, as follow: