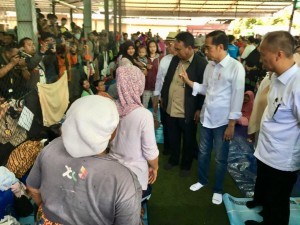 “I see that the TNI and the Polri, supported by local government, have quickly conducted evacuation process. I really appreciate the quick response that has been done,” President Jokowi said during inspecting the impact of disaster at Mutiara Carita Cottage, Carita Beach, Banten, Monday (24/12).

The President and his entourage met with the victims who were under medical treatments at the Labuan Health Center after listening to an explanation regarding the disaster areas and the emergency response that has been conducted.

Afterward, the President and his entourage visited disaster management center operated by Ministry of Social Affairs in Rancateureup Village, which is approximately 100 meters from the Labuan Health Center, engaged in a conversation with refugees and inspected emergency food center.

After that, President Jokowi met the victims who were being treated at field hospital established by the 1st Medical Battalion of Marine, and inspected the damage around Mutiara Carita Cottage, the last area affected by the tsunami.

The President seriously listened to explanations and reports regarding the situation in the affected area.

In the meantime, the National Agency for Disaster Management (BNPB) stated that as of Monday (24/12) at 07:00 Western Indonesian Time, the tsunami has caused at least 281 people died, 1,016 injured, 57 reported missing, and 11,687 people were displaced.