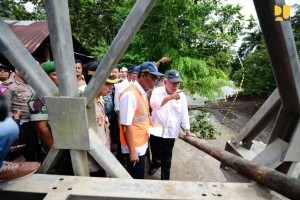 Minister of Public Works and Public Housing Basuki Hadimuljono said the restoration of traffic on Padang to Bukittinggi which was cut off due to Batang Kalu Bridge collapsed in 2×11 District, Padang Pariaman, West Sumatra, Monday (10/12) will be carried out in 3 phases.

The first phase of the constructions is to construct a temporary bridge which only provides one-way traffic from Padang to Bukittinggi. Meanwhile on the reverse direction, the traffic is redirected through Sicincin-Melalak. The temporary bridge is expected to be ready on Saturday (15/12).

President Joko Widodo ordered us to recover the connectivity of Padang-Bukittinggi immediately, the Minister said.

The third phase, if the bailey bridge construction is completed, it will be used for both ways and the temporary bridge will be dismantled and replaced with a permanent bridge. Construction of a permanent bridge will begin in mid-January 2019 and is expected to be completed within 6 months, Basuki said, adding that the Ministry will employ local contractor and local supplier in West Sumatra.

According to the Minister, the cost of the bridge construction is estimated to be around Rp15 billion, with a length of 30 meters and uses a bored pile construction.

To prevent the water scouring under the bridge structure, the Ministrys River Management Agency (BWS) of Sumatra V of Directorate General of Water Resources is currently working on constructing a building to directing the Batang Kalu River flow and is expected to be completed in February 2019, Head of BWS of Sumatra V Maryadi Utama said.

Furthermore, Basuki also continued his working visit to inspect another bridge, namely Batang Mangor Bridge in Padang Sago District which was also damaged by the floods. The bridge will be jointly repaired by the Ministry and the regional government. We will perform a bridge checks (to assess the damage) first, the Minister concluded.