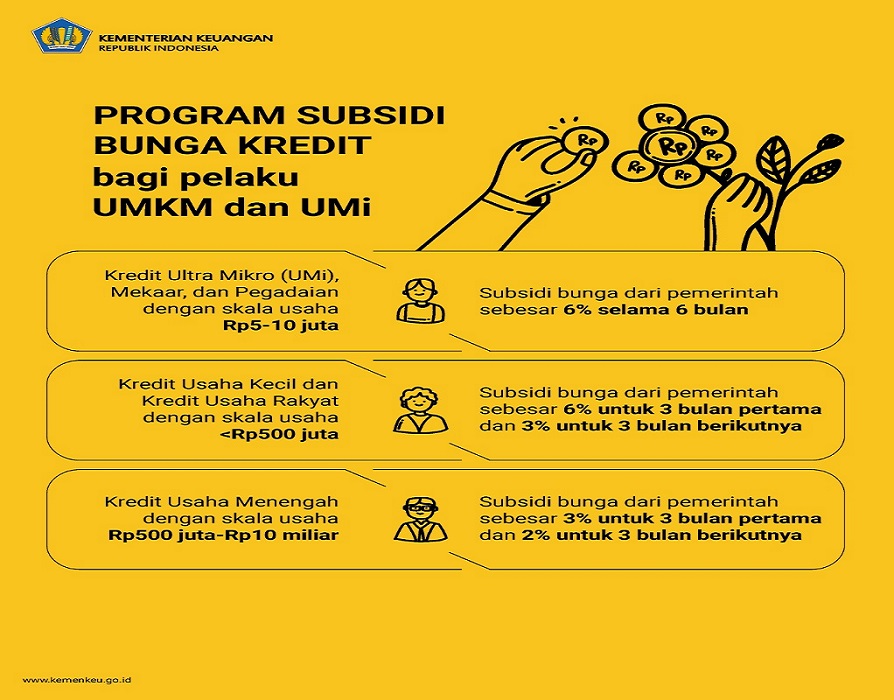 As part of the national economic recovery measures following the COVID-19 pandemic, the Government continues to provide fiscal support to maintain household consumption and to support micro, small and medium enterprises (MSMEs).

For that reason, the Government has allocated around Rp65 trillion for 103 million individuals in the form of basic food cards, pre-employment cards, electricity tariff reducation and other programs to support households.

As for MSMEs, the Government has allocated around Rp34.15 trillion for around 60.66 million accounts for the relaxation of installment payments and credit interest subsidies through People’s Business Credit (KUR), Ultra Micro (UMi), Mekaar program, banking, mortgage company and others.

“The Government is currently finalizing the implementation of those economic recovery programs by considering measures to support business actors affected by the pandemic, while still upholding the principles of good governance, transparency, accountability, fairness, as well as refraining from causing moral hazard and sharing of costs and risks between stakeholders,” Minister of Finance Sri Mulyani said in Jakarta, Friday (8/5).

“Meanwhile 9 million beneficiary families who are included in the Jakarta cash assistance program are excluded from those who receive staple foods card. In total, the Government has reached more than 55-59% of the Indonesian population to get social assistance either in the form of Direct Cash Assistance (BLT) or staple foods card in Greater Jakarta,” Sri Mulyani said.

The Minister further said apart from that figure, there are still other 9 million recipient groups whose budgets came from villages, so that the social assistance programs are estimated to reach more than almost 60% of the Indonesian population.

The additional Workers Card for around 5.6 million recipients has also included the middle class community to illustrate the entire expansion of the social assistances, she added. (Kemenkeu/EN)