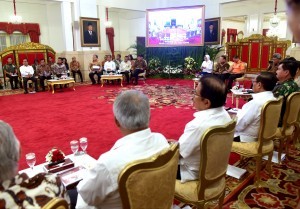 The Central Statistics Agency (BPS) has submitted a report stating that Indonesias trade balance during September 2018 shows an approximately US$ 230 million surplus.

“It shows a good development of our economic performance. We are committed to limiting imports and increasing exports,” President Joko Jokowi Widodo said in his introductory remarks at the Plenary Cabinet Meeting on Evaluation of Disaster Mitigation at the State Palace, Jakarta, Tuesday (16/10).

For the record, the BPS has reported that Indonesia’s export value in September 2018 reaches US$ 14.83 billion, while the value of imports in the same month is US$ 14.60 billion. Thus, the trade balance in September 2018 recorded a surplus of approximately US$ 230 million.

During the Plenary Cabinet Meeting, President Jokowi instructed cabinet members to sustain innovation to increase export and control import as well as to monitor the latest development in order to achieve trade surplus in the months ahead.

“I also ask the Cabinet Ministers to pay attention to detail in order to increase export, both in oil and gas and in non-oil and gas. the President said.

Regarding the Biodiesel-20 (B-20) program, President requested a report, and urged that the implementation of the program must be closely monitored.

“I heard that there was a little problem regarding the supply of CPO, I will ask for a report on this matter,” President Jokowi concluded.