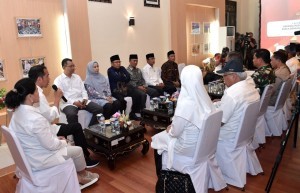 Around 5,000 households in quake-hit West Nusa Tenggara (NTB) province have received relief funds to reconstruct their houses, which were severely damaged by the quake that hit several regions there in July.

The NTB Governor has told me that the relief funds have been disbursed to 5,000 households and the number of households that receive the relief funds will continue to increase, President Joko Jokowi Widodo told reporters during a working visit to the province on Thursday (18/10).

For the record, President Jokowi is in West Nusa Tenggara province again to monitor the process of relief funds disbursement on the ground following the report that several residents faced complicated procedures and complex bureaucracy in the disbursement process.

In the meantime, Minister of Public Works and Public Housing Basuki Hadimuljono reported that the reconstruction of damaged public facilities have mostly completed, adding that the Ministry is  reconstructing not only public facilities like hospitals, community health centers (Puskesmas), school buildings, and places of worship, but also residential houses.

I think the public should know that a lot of public facilities have been reconstructed, as previously reported by the Public Works and Public Housing Minister, the President added. (BPMI Sepres/ES) (RAS/EP/Naster)