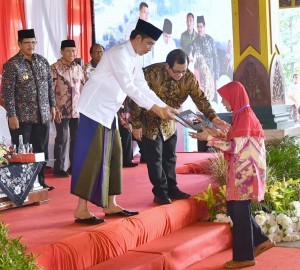 The recipients of land certificates came from 4 municipalities/regencies: 1,350 from Bangkalan, 300 from Sampang and 400 from Surabaya.

President Jokowi in his remarks explained the reason for the acceleration of land certificate distribution. According to him, he often received many reports regarding land disputes every time he went to various regions in Indonesia for working visit.

“The land certificate is a legal evidence to our land possession.” the President said, adding that the certificate will prevent land dispute.

If you want to use your certificate as loan collateral, please calculate the installments. Use every penny of it as working capital, the President said.

After delivering his remarks, President Jokowi engaged in conversation with two certificate recipients, Mashuri and Suprapti. They said that they have not registered their parcels of land before because they did not have money to pay the administrative charge and now the process for the issuance of their land certificates is quick and free of charge.