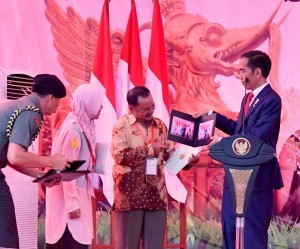 The Indonesian Government continues to accelerate the distribution of land certificates to prevent land disputes, according to President Joko Jokowi Widodo.

Therefore, starting in 2015 the President instructed the Minister of Agrarian and Spatial Planning / Head of the National Land Agency (BPN) to accelerate the land certification. As a result, 5 million certificates have been completed last year.

President Jokowi hopes that after the people have certificate as proof of legal rights of their land, the disputes can be reduced.

Minister of Agrarian and Spatial Planning / Head of BPN Sofyan Djalil reported that there were 26,037 certificates distributed to the recipients from 13 regencies/cities in East Kalimantan and North Kalimantan.