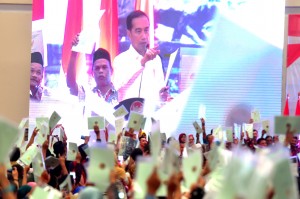 President Joko Jokowi Widodo called on the people who want to use their land certificates as bank loan collateral to carefully calculate the installments.

The President made the statement in his remarks during the distribution of land certificates to Bekasi residents at Jababeka Convention Center, North Cikarang district, Bekasi, West Java, Friday (25/1).

The President also reminded the certificate holders to spend their money wisely and to use the loan for productive purposes only.

Use the loan to start business and investment. Do not use it to buy car, motorcycle, television, or refrigerators, President Jokowi said, adding that the profit should be saved to expand the business.

In the meantime, the President said that the Government distributes land certificates to prevent land disputes.

According to him, every time he visits a village or a hamlet, he gets many reports on land disputes because the people do not have legal evidences of their land.

“Land certificate is a legal evidence of land possession,” President Jokowi said, adding that the certificate will prevent false claims since it contains specific information on the owner, size and location of the land.