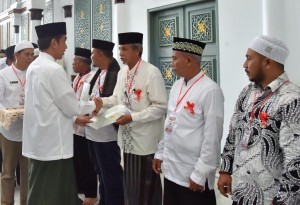 As part of his working visit, President Joko Jokowi Widodo handed over 320 waqf land certificates to the residents of Aceh after the Friday prayers at the Baiturrahman Mosque, Banda Aceh, Friday (14/12).

In his remarks, the President said that land certificate is very important to prevent land dispute. He added that he always received complaints from the people during his working visit regarding land disputes among the people, between the citizen and the Government, and between the people and the corporations.

“We will continue to distribute land certificates to prevent land disputes since there are a lot of buildings without the certificates,” the President added.

In the meantime, the President also reminded the participants to continue to maintain the unity and diversity of Indonesia and not to let different political views in the election destroy the unity of the nation.

“Once again I invite all of you to maintain our harmony, our brotherhood and our unity for a peaceful Aceh, for a peaceful Indonesia,” President Jokowi concluded. (BPMI/EN)