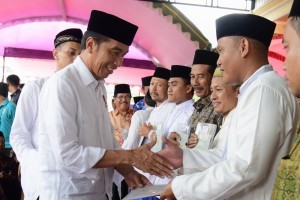 “Rising land prices will lead into land dispute, if the waqf land is uncertified, the President said in his remarks during the distribution of waqf land certificates at Ar-Rahman Mosque, Sawoo District, Ponorogo, East Java, Friday (4/1).

On that occasion, President Jokowi handed over 213 land certificates for mosques, Islamic boarding schools, and musallas.

President Jokowi said that during his working visit to many places in Indonesia, he often gets report regarding land disputes. According to him, a land certificate is a legal evidence of land ownership that prevents land dispute and provides important information including the owner, size and location of the land.

The President went on to say that the waqf land certificates, mostly for mosques and musallas, have been submitted not only in East Java, but also in Aceh, West Sumatra, and West Nusa Tenggara.