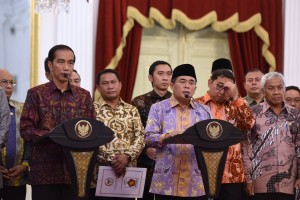 President Jokowi and House of Representatives (DPR) Speaker Ade Komarudin accompanied by other DPR chairmen deliver press statement after a consultation meeting, at the Merdeka Palace, Jakarta, on Monday (22/2) afternoon

President Joko Jokowi Widodo and the Indonesian House of Representatives (DPR RI) Speaker have agreed to postpone the discussion on the revision of the Law Number 30 of 2002 on the Corruption Eradication Commission (KPK).

After discussing the plan to revise the KPK Law, we have agreed not to discuss the revision now and we will postpone it, President Jokowi said in a press statement after the meeting.

The President also appreciates the processes of the political dynamics in the DPR, particularly in the plan to revise the law.

I consider the need for sufficient time to finalize plans to revise the KPK Law and to disseminate it to the people, President Jokowi firmly said.

In the meantime, Speaker of the Indonesian House of Representatives (DPR RI) Ade Komarudin said that the DPR is determined to pass many laws and so far 40 laws have been stipulated in the National Legislation Program (Prolegnas).

Several laws, Ade Komarudin added, have become the priorities of the DPR and the Government, among others, laws on tax amnesty, terrorism, and the revision of the KPK law.

Weve already said that we had a meeting to discuss tax amnesty. The result of todays meeting will be announced in a plenary meeting and will be scheduled in a consultation agency to be discussed. We are also determined to finish the issue in the trial session, Ade said.

According to Ade, the DPR and the Government are also determined to discuss the Law on Terrorism immediately.

Regarding to the revision of KPK Law, Ade said that both the DPR and the Government have also agreed to postpone the discussion, yet they did not delete the issue from Prolegnas list.

The time will be spared to give explanation to the people because we (the DPR) and the Government have agreed to improve 4 points that become our concerns and we consider it a very good way to strengthen the KPK in the future. However, it takes time to explain it to the people, particularly to anti-corruption activists, Ade said.

Ade further said that the delay is not because of pressure from certain people, but is instead an agreement between the DPR and the Government to make state mechanism somehow work well.