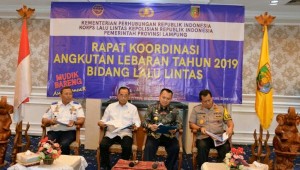 To provide convenience and to ensure the safety of travelers who drive through toll roads or non-toll roads in Lampung, Minister of Transportation Budi Karya Sumadi has called on Lampung Provincial Government and Lampung Regional Police to beef up security in the province.

The Minister made the statement after the 2019 Eid Transportation Coordination meeting, at the Lampung Governor’s Office, Bandar Lampung Thursday (23/5).

Budi asserted that roads in Lampung are safe to pass by travelers ahead of Eid al Fitr annual exodus known as mudik, including at night. Governor of Lampung and the Lampung Police Chief have ensured that the roads are safe, including travelling at night, the Minister said.

Therefore, the Minister continued, he calls on those who travel by ships not to worry to come to Lampung at night.

The Minister also expressed appreciation for all the work the ranks of the Regional Government and the Lampung Regional Police have taken, particularly security measures along the roads in Lampung. This must be disseminated to the public that the roads in Lampung are safe to pass, he said.

Furthermore, with the availability of toll road facilities in Lampung on this years mudik, the travelers will use both toll roads and national non-toll roads.

There are two alternatives be it toll roads or non-toll roads so that it is expected that congestion does not occur, the Minister said.

Riding by using toll roads is definitely more comfortable than using public roads. In Lampung region alone, there are 11 rest areas available and mobile dispensers in each rest area that can be used by travelers, he said.