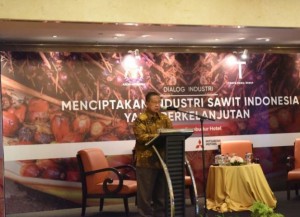 Indonesian Government is committed to ensuring the sustainability of palm oil industry in Indonesia, despite many challenges.  A number of steps have been and will continue to be taken to maintain the industry.

“The palm oil sector has been proven to be able to improve people’s welfare and reduce poverty,” said Coordinating Minister for the Economy Darmin Nasution at a Seminar on Creating a Sustainable Palm Oil Industry, at Borobudur Hotel, Jakarta, Wednesday (31/7).

The data, Darmin stated, recorded that the total value of palm products exports in 2018 amounted to US$17.89 billion and contributed up to 3.5% of GDP.

In the energy security sector, the implementation of mandatory biodiesel policy in the period of August 2015 to 30 June 2018 has saved US$2.52 billion in foreign exchange.

The Industry, the Coordinating Minister added, is able to absorb up to 4.2 million direct labor and 14.3 million of indirect labor, while oil palm plantations run by independent smallholders can absorb 4.6 million people.

In addition, since 2000, Indonesia’s palm oil sector has liberated 10 million people from the poverty line, including at least 1.3 million people living in rural areas.

“Regions that are dealing with palm oil have lower poverty rates than other regions. This context shows that the palm oil industry contributes to the achievement of the 2030 SDGs (Sustainable Development Goals). It means that we are in line with the UN program on improving the community welfare,” Darmin said.

Meanwhile, in terms of productivity, palm oil is able to produce 6-10 times compared to other vegetable oils. In comparison, oil palm has a productivity of 4 tons/ha, while soybean, sunflower, and rapeseed oil have the productivity of 0.4 tons/ha, 0.6 tons/ha, and 0.7 tons/ha respectively.

“This is a unique situation that R&D sector does not work in other commodities such as rubber and coconut, which are dominated by smallholder plantations,” he said, adding that the foreign exchange from exports of palm oil and its derivatives has reached US$20 billion.

Darmin also went on to say that Indonesia has implemented the Indonesian Sustainable Palm Oil System (ISPO) since 2011. The ISPO was designed to ensure that Indonesian palm oil would be managed with Good Agricultural Practices (GAP) in accordance with sustainable social, economic and environmental principles.

“We are currently in the process of strengthening the ISPO by preparing a new Presidential Regulation. The old ISPO is less assertive in providing support to small plantations,” he stated, adding that with the new regulation, small plantations can truly meet sustainability standards.

“(We have) a concern related to the use of the tree logs after rejuvenation. The logs can be an alternative to meeting the needs of national and international wood products. This is also a strategic effort to reduce emissions and increase carbon absorption,” Darmin said.

He also mentioned that palm oil plantations data synchronization continues to be carried out. The data accuracy, he said, is useful for optimizing the palm oil potential and fighting against all attempts to discriminate from outsiders.

For the records, Indonesia is facing a challenge due to European Commission’s Delegated Act of the Renewable Energy Directive II (RED II). This regulation classifies palm oil as an unsustainable “high-risk”  ILUC (Indirect Land Use Change) biofuel commodity. Another challenge is the imposition of anti-subsidy duties on palm oil-based biodiesel to Europe.

“The Government, together with all stakeholders, is finalizing strategies and steps for integrated diplomacy,” Darmin stated. (Coordinating Ministry for the Economy/ES)