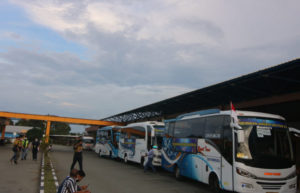 Supporting Transportation for PON & Peparnas in Papua. (Photo by: papua.go.id)

In a bid to make the XX National Sports Week (PON) of 2021 and XVI National Paralympic Week (Peparnas) a success, the Government through Ministry of Transportation ensures the readiness of transportation facilities and infrastructure in Papua province.

“We make sure that everything runs well,” Minister of Transportation Budi Karya Sumadi said after inspecting transportation facilities and infrastructure in Jayapura and Merauke, Saturday (25/09).

For land transportation, the Ministry has sent 428 buses to three cities that will host sporting events during PON, namely Jayapura, Timika, and Merauke. In addition, the Ministry has also prepared 515 bus crews, of which 261 are drivers recruited from Papua province’s residents, as a form of empowering indigenous Papuans and creating job opportunities.

During PON, the buses will operate from 06.00 to 22.00 Eastern Indonesian Time and will serve as a mean of transportation for athletes and officials as well as will be used to pick up contingents from Sentani Airport.

To support the Peparnas, which will be held after PON, 160 buses will be modified by making an on/off ramp with an appropriate slope to ease the athletes who use wheelchairs.

For the record, after the PON and Peparnas in Papua ends, some of the buses will be used to serve pioneering and urban transportations under the management of state-owned bus operator Perum Damri. Moreover, other facilities such as water buses, Type A terminal and ATCS can be utilized to improve transportation services in Papua and its surrounding areas. (Ministry of Transportation PR/UN) (GWH/MMB)