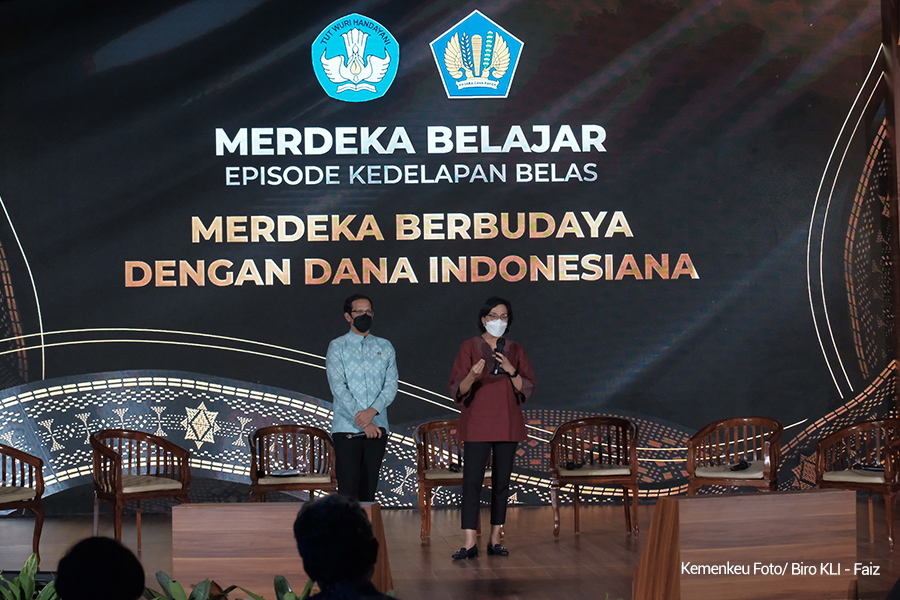 Minister of Finance Sri Mulyani and Minister of Education, Culture, Research, and Technology Nadiem Makarim. (Photo by: PR of Ministry of Finance)

In a bid to support a stable and sustainable cultural development, Ministry of Education, Culture, Research, and Technology and Ministry of Finance have launched Indonesiana Fund.

Indonesiana Fund is an endowment fund with a primary fund that will not be used for other needs and will continually be invested specifically in the cultural sector. The primary fund will continue to be increased and accumulated annually. The outcome of the primary fund management will then be used as a source of fund for various cultural activities.

“As a mechanism to manage fund for education, including culture, we established this endowment fund. The philosophy of endowment fund is to secure so that the fund we allocate each year is not completely used up at the end of the year, it can be put into a piggy bank. In state mechanism, the piggy bank is called Public Service Agency (BLU). For this, we made a piggy bank named National Education Development Fund (LPDP), so each year we deposit the fund there,” Minister of Finance Sri Mulyani Indrawati said at Freedom to Learn event, Wednesday (03/23).

According to Sri Mulyani, since 2020, Ministry of Finance has begun to allocate Rp1 trillion for endowment fund for culture deposited in LPDP, then in 2021, the ministry deposited another Rp2 trillion, so the current amount of the fund is Rp3 trillion.

“Now with the establishment of Indonesiana Fund, we will be able to keep Bapak President’s promise to achieve Rp5 trillion. Next year, we hope it can be able to be replenished so that it reaches Rp5 trillion,” she said, adding that this endowment fund must be utilized with a good governance that can be taken into account because the source is the state’s money.

The official website of Ministry of Finance can be accessed through this link.