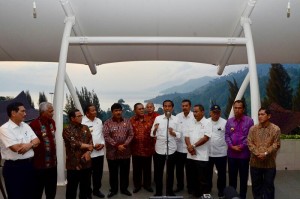 After having a limited meeting, President Jokowi delivers a press statement on Lake Toba tourist destination (1/3)

After holding several meetings discussing the development of Lake Toba as one of the 10 priority tourist destinations, the final meeting was held at the Niagara Hotel, Simalungun Regency, North Sumatra, on Tuesday (1/3) afternoon.

Based on the results of the meeting adopting the theme United for Lake Toba, the Government has decided to establish Authority and Infrastructure Development Agency to develop Lake Toba as a tourist destination.

However, since it involves 7 regencies, the Central Government will face difficulties if there is no agreement among them. Nevertheless, because they all have the same opinions and have already signed the agreement, the work will begin immediately, President Jokowi said in a press statement after the meeting.

President Jokowi added that through the Authority Agency, things related to permits for tourist destinations which have been stipulated for 500 hectares, will become the authority of the Agency, while the other matters remain under the authority of regents and regional government.

The Government will also take several measures to develop Lake Toba tourist destination, among others, by expanding the Silangit Airport as the nearest airport to the Lake and the runways as well as the terminals will be expanded.

Furthermore, President Jokowi hopes that the betterment of transportation infrastructures will boost the number of tourists next year and will continue to increase in the year after.

We will build hotels and improve facilities in the surrounding areas so they will attract domestic tourists and boost the number of foreign tourists, the President said, adding that roads connecting Simalungun and Lake Toba are better than they were one and a half year ago.

Meanwhile, roads in Samosir Island, Muara, Simalungun, and the plan to build a toll road connecting Tebing Tinggi and Parapat have not been executed, the President added.

President Jokowi also mentioned enterprises that have been indicated to have damaged the ecosystem around Lake Toba and the regents are expected to approach the business doers, both related to floating net cage and the environment.

In the limited meeting, all regents whose areas are located near Toba Lake also gave their opinions, which were noted by the Minister of Public Works and Public Housing. (DND/SLN)(RAS/EP/YM/Naster)