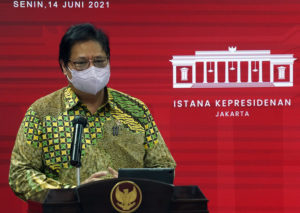 The Government has announced its decision to extend the level-4 activity restrictions (PPKM) to 9 August in several regions across the country, including 45 regencies/cities outside the islands of Java and Bali.

“The Government has extended the level-4 PPKM in several regions across the country, including 21 provinces and 45 regencies/cities outside the islands of Java and Bali,” Coordinating Minister for Economic Affairs Airlangga Hartarto said on Monday (02/08).

“The development of cases is still fluctuating but there have been some improvements in several indicators,” Airlangga said.