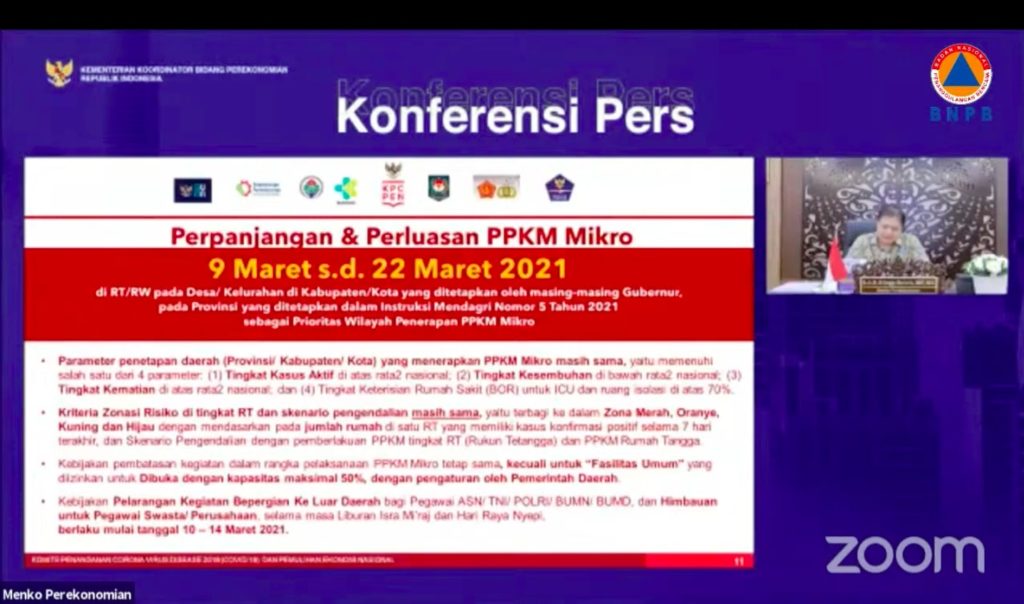 The Government has decided to extend the enforcement of micro-scale public activity restrictions (PPKM Mikro) for two weeks, from 9 to 22 March 2021.

The decision is made following effective results of PPKM Mikro in curbing the spread of COVID-19.

In addition, the Government has also decided to expand the implementation of micro-scale PPKM stage III to three provinces, namely East Kalimantan, South Sulawesi, and North Sumatra along with the implementation in the islands of Java and Bali.

“The policy on micro-scale PPKM extension and expansion is carried on for the next two weeks, from 9 to 22 March 2021. It is expanded to three provinces, namely East Kalimantan, South Sulawesi, and North Sumatra,” he said.

The legal basis for the extension and expansion of micro-scale PPKM, Airlangga added, is Instruction of Minister of Home Affairs Number 5 of 2021 on Micro-Scale PPKM Extension.

According to Airlangga, PPKM stage I and II (from 25 January to 8 March 2021) has succeeded in curbing the national COVID-19 positivity rate.

“Overall, the PPKM has succeeded in curbing the positivity rate, with indicators such as Bed Occupancy Ratio (BOR), recovery rate, and fatality rate, both nationwide and in the seven provinces where micro-scale PPKM is imposed,” he said.

Airlangga added that from 22 February to 7 March 2021 during the implementation of micro-scale PPKM stage II, the national evaluation saw positive results. The positivity rate declined by 1.58 percent, the recovery rate rose by 1.57 percent, and the fatality rate remained at 2.70 percent.

The three provinces have a quite high number of active cases that require further attention, with East Kalimantan at 6,720 cases, South Sulawesi at 3.535 cases, and North Sumatra at 2,555 cases.

The policy on micro-scale public activity restrictions PPKM stage III remains relatively the same, except for the addition of public facilities, which are allowed to be reopened with a maximum capacity of 50 percent and regulations determined by respective regional governments.

To prevent the spike of COVID-19 cases due to a long holiday, during the holiday of Isra Miraj (Ascension Day of Prophet Muhammad) and the Day of Silence (from 10 to 14 March 2021), the Government has prohibited interregional travel for civil servants, personnel of the Indonesian National Defense Forces (TNI)/the Indonesian National Police (Polri), and employees of State- and Region-Owned Enterprises.

Private employees and companies have also been urged not to travel outside of their region.

Head of the National Disaster Mitigation Agency (BNPB) Doni Monardo who is also acting as Head of the COVID-19 Handling Task Force said that the holiday season is always likely to increase daily active cases.

“As for the private sector, we have ordered Head of the Agency to urge companies to restrict their employees from traveling out of town during the holiday,” said Doni.

“Instruction of Minister of Home Affairs Number 5 of 2021 also describes the coordination with Head of Neighborhood/Hamlet, Head of Village/Urban Village, local youth organization, and so on. Then, Village/Urban Village Post and Sub-District Post must be established in regions that have not had the posts yet. Its function must be optimized,” said Secretary General of Ministry of Home Affairs Muhammad Hudori.

To implement micro-scale PPKM at the village/urban village level, the preparation and implementation of 3T measures (testing, tracing, and treatment) at the village/urban village level and neighborhood/hamlet level are monitored. In addition, assistance for rice and masks is prepared and distributed through the local Sub-District Police Precinct/Military Sub-District Command Sector. Risk Zonation mapping system at the neighborhood level and 3T data collection are also integrated.

“Provincial governments coordinate the data on Risk Zonation mapping at the neighborhood level and the data on (rice, mask) assistance distribution, then report it periodically to the Central Task Force via Regional Task Force. Besides, they also must assist and monitor Posts in villages/urban villages,” said Airlangga.

Efforts to boost 3T implementation during micro-scale PPKM remain the same. The first is conducting free Antigen swab tests for the people at the village/urban village level, facilitated by Ministry of Health at their respective health care facility and community health center.

Tracing is improved and carried out intensively using a tracer from village supervisory non-commissioned personnel/public order officers who have been trained by the Ministry of Health. Finally, treatment is conducted with self-isolation and centralized isolation, and given at health care facilities coordinated by Village/Urban Village Post.

The 3T acceleration strategy is also prioritized by Ministry of Health to tackle the pandemic this year.

“As for tests, we will test at least 1 of 1,000 citizens on a weekly basis, and the results are targeted to come out in less than 24 hours after the specimen is received. As for tracing, 15-30 close contacts per case will be traced and the confirmation must come out in less than 72 hours,” said Minister of Health Budi Gunadi Sadikin.

Ministry of Health has also distributed 653,575 rapid antigen test kits to seven provinces in the first stage. 1 million kits from the WHO have arrived in Indonesia and will be distributed, including to the three provinces that are implementing micro-scale PPKM on 10 March.

The budget for micro-scale PPKM implementation is sourced from Village Funds, approximately Rp24 trillions of Village Funds ceiling for 23 thousand villages/urban villages in the seven provinces.

“Only Rp3.16 trillion or 12 percent has been used, and only 12,192 villages or 43 percent have disbursed the funds. Hence, it can still be increased, especially with the additional 3 provinces,” said Secretary General of Ministry of Villages, Development of Disadvantaged Regions, and Transmigration (PDTT) Taufik Madjid. (PR of Coordinating Ministry for Economic Affairs/UN) (DH/MUR)