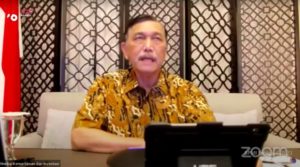 The Government has announced to extend the implementation of the Public Activity Restrictions (PPKM) in Java and Bali until 23 August 2021 in order to continuously increase efforts to control the COVID-19 pandemic.

“This good momentum must be maintained. Based on the latest evaluation, under the direction and instructions of the President, PPKM Levels 4, 3, and 2 in Java-Bali will be extended until 23 August 2021,” said Coordinating Minister for Maritime Affairs and Investment Luhut Binsar Pandjaitan, in a press statement on Monday (16/8).

A number of adjustments will also be made in the implementation of PPKM for the period 17-23 August. Among other things, expanding the cities at Level 4 that can pilot the implementation of health protocols in shopping centers/malls. In the previous period, trials were conducted in four cities, namely Jakarta, Semarang, Bandung, and Surabaya.

“The Government has also increased the visiting capacity of shopping centers/malls to 50 percent and provides access to dine-in by 25 percent or only two people per table at shopping centers and malls starting next week in Level 4 and Level 3 cities,” he said.

The Government will also still use the PeduliLindungi application to screen visitors and as part of adaptation to new habits. He explained that this will make the public get used to a digitalized disciplined life that would make changes to the current people’s lives.

“As the President said, our life will change due to the Delta variant. We all have to be heavily involved with digitalization to control this COVID-19,” he said.

In addition, the Government will also conduct trials of implementing health protocols for export-oriented and domestic companies which will be carried out by Ministry of Industry. The total number of employees who will take part in this trial is more than 390,000 people.

“The industry will be allowed to operate 100 percent with the implementation of a minimum of two shifts. The company is obliged to use the PeduliLindungi application, as well as to screen employees and non-employees who enter the factory location,” said Luhut.

Moreover, outdoor sports that are carried out individually or in groups of no more than four people and do not involve physical contact will be allowed by following strict health protocols. The trial of this regulation also uses the PeduliLindungi application and is carried out in four agglomeration cities in Java-Bali as well as cities that apply PPKM Level 4 and Level 3.

In the meantime, the Government will also increase the capacity of places of worship to 50 percent in cities/districts with PPKM Levels 4 and 3 with strict health protocols.

“This decision will be stipulated in the Instruction of Minister of Home Affairs in detail,” the Coordinating Minister said.

Furthermore, Luhut added, based on the evaluation of the implementation of PPKM Levels 4, 3, and 2 which was carried out from 7-16 August, the results were getting better.

“The confirmed cases on 15 August fell to 76 percent. Last week it was at 59 percent and now it is at 76 percent. Active cases are also fall to 53 percent from their peak point,” he explained.

Meanwhile, the latest data shows that the recovery rate is increasing, the death rate continues to decline, the positivity rate is decreasing, as well as the occupancy rate of beds in hospitals has also decreased.

However, Luhut acknowledged that based on the results of field visits some time ago, there are still a number of improvements that need to be made in several areas.

“Therefore, intervention steps have been taken, including by mobilizing self-isolating patients to isolation centers provided by the city/district governments and ensuring the availability of drugs and oxygen concentrators,” he added.

With the ongoing interventions, the Coordinating Minister expressed hope that in the next week there will be significant improvements, especially for the areas of Bali and Greater Malang.

Regarding mobility, Luhut said that people’s mobility in Java-Bali had mostly returned to normal conditions as before the entry of the Delta variant. There has been a significant increase in people’s mobility compared to that in the beginning of last July.

“The economy is recovering quickly, but the risk of cases is projected to increase in the next 2-3 weeks. So we all have to be extra careful in dealing with this. We must follow health protocols and support vaccination drive,” he said. (FID/UN) (EST/MMB)