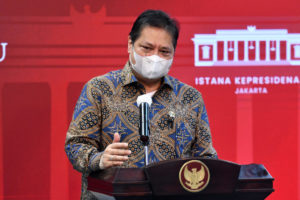 The Indonesian Government has announced that it extends public activity restrictions (PPKM) in regions outside the islands of Java and Bali from 15 to 28 February.

“The criteria (on the implementation of PPKM level) are based on the assessment level of the pandemic situation, be it community transmission, including numbers of cases, deaths, hospitalizations, and response capacity (testing, tracing, and treatment),” Coordinating Minister for Economic Affairs Airlangga Hartarto said after a limited meeting on PPKM evaluation, Monday (02/14).

Airlangga stated that the change in the PPKM level criteria was an anticipatory measure to deal with the potential spike in cases of the Omicron variant in the next 2-3 weeks.

“The Government, according to the President’s directives, is ordered to continue to speed up vaccination, especially outside Java and Bali, both for the second dose and the booster shot,” he stated.

Airlangga also went on to say that the effective reproductive number (Rt) in Indonesia has increased in the past week. It rose to 1.13 and occurred across all islands.

Although the proportion of cases outside Java and Bali islands is still relatively low at 13.9 percent of the national active cases, the Coordinating Minister underscored that there has been a significant spike recently.

“There has been a spike since January, 24. We will monitor the next 2-3 weeks, the number is likely to increase again, because as we know, it is usually slower than Java and Bali,” he explained.

Along with the increase in daily cases, the level of treatment in hospitals outside Java and Bali islands also increased in 10 provinces and 15 regencies/cities. However, Airlangga said that although the spike in cases was higher than during the Delta wave, the bed occupancy rate (BOR) for COVID-19 patients in hospitals was still relatively under control.

“The (national BOR) is still relatively low at 30.52 percent. The BOR for all provinces outside Java and Bali islands is less than 20 percent, except for South Sumatra with 30 percent, West Papua with 25 percent, South Kalimantan with 23 percent, North Sulawesi with 23 percent, and Bengkulu with 21 percent,” he said, adding that the BOR in centralized isolation facilities is also still under control at 2.88 percent.

As anticipation, the Government will prepare 2-3 times more beds in the facilities compared to that of the previous Delta wave. “Between 69,000-91,000 beds as a mitigation measure,” he said. (FID/UN) (FI/MMB)