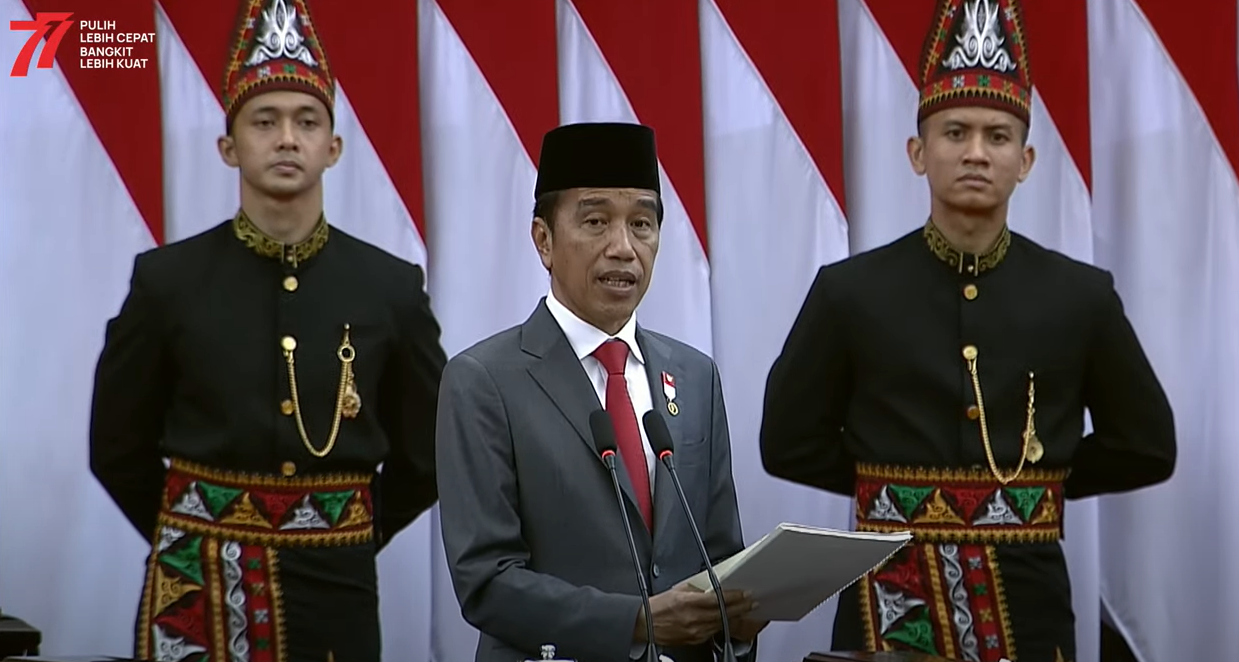 President Jokowi on the Presentation of the Government Statement on the Bill on the State Budget for the 2023 Fiscal Year and Its Financial Note before the Plenary Session of the House of Representatives of the Republic of Indonesia, Jakarta, Tuesday (08/16). (Image Source: a screenshot)

The Government has set the target for next year’s economic growth to reach 5.3 percent, President Joko “Jokowi” Widodo has said.

“We will continue to redouble efforts to ensure the sustainability of national economic recovery,” President Jokowi said at his address on the Presentation of the Government Statement on the Bill on the State Budget for the 2023 Fiscal Year and Its Financial Note before the Plenary Session of the House of Representatives of the Republic of Indonesia, Jakarta, Tuesday (08/16).

According to the President, the figure is based on against the backdrop of the latest dynamics of the national economy, the development agenda that has been set, as well as the risks and challenges faced by the country.

To reach the set figure, the Head of State/Government continued, the Government will continue to push for a consistent production expansion in order to provide employment to the greatest extent possible.

“Various new growth sources must be immediately materialized. The implementation of various structural reforms agenda must continue to be accelerated for the sake of economic transformation.  Investment must continue to be stimulated, while competitiveness of national manufacturing products in the global market must be improved,” President Jokowi stated.

As the private sector grows stronger to become an engine for growth, fiscal policy management can be better directed to strike a balance between improving productivity and competitiveness, as well as maintaining fiscal health and continuity in the face of future risks and dynamics, the President added.

“Appropriate policy mix, as well as better synergy and coordination between fiscal, monetary, and financial authorities will serve as a strong foundation in accelerating national economic recovery and strengthening stability of the financial system,” he asserted.

In addition, the Government will maintain inflation rate at around 3.3 percent and the State Budget will continue to be earmarked for anticipating external inflation pressure, particularly energy and food inflations.

“Inflation assumption at this level also illustrates the continuity of recovery in the demand side, particularly due to improved people’s purchasing power,” the President said, adding that average Rupiah exchange rate is expected to hover around Rp14,750 per US dollar and the average 10-year government bond rate is predicted to reach the level of 7.85 percent.

“Indonesia’s crude price (ICP) is projected to hover around 90 US dollars per barrel. On the other hand, oil and gas lifting is forecast to reach 660,000 barrels per day and 1.05 million barrels oil equivalent per day respectively,” President Jokowi said.

The President also stated that Indonesia has been touted as one of the countries that have successfully tackled the pandemic and quickly rebuilt the economy.

Strategic sectors such as manufacturing and trade sectors, President Jokowi continued, are growing expansively, sustained by the recovering of people’s consumption and the solid export performance. Balance of trade has recorded a surplus for 27 months consecutively.

Moreover, manufacturing sector that is experiencing a robust recovery is supporting the high performance of the national export. “This reflects the success of our industrial downstreaming strategies that we have implemented since 2015. The high export performance is also supported by the mining sector in line with the rising global commodity prices,” President Jokowi said.

According to the President, transportation and hospitality sectors that are hardest hit by the pandemic have begun to recover and grew by 21.3 percent and 9.8 percent respectively in the second quarter of 2022.

“In July 2022, the indicator of the Purchasing Managers’ Index (PMI) improved to 51.3 percent, reflecting a stronger recovery in the second semester,” he remarked. (DND/MAY/FID/UN) (GWH/HD/MUR)