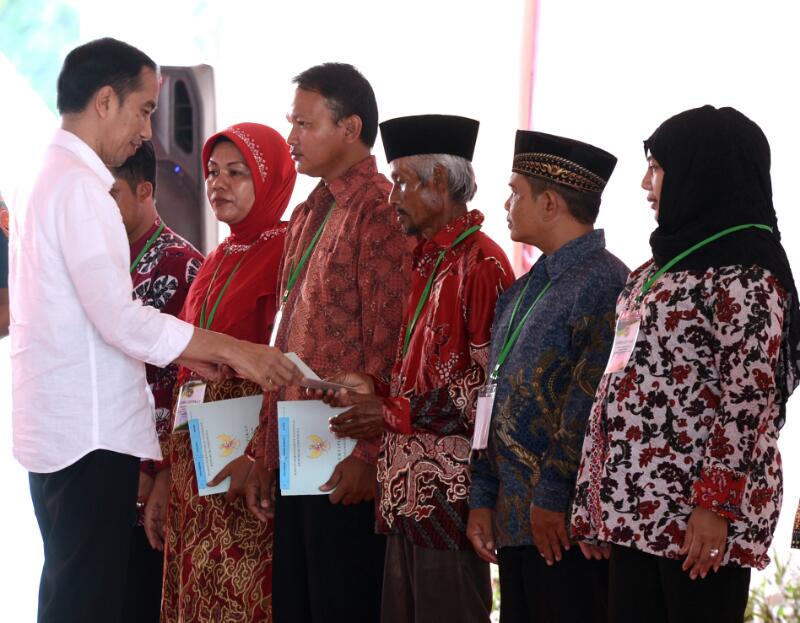 According to the President, previously the Government issued only around 400,000  500,000 land certificates in a year all across Indonesia.

According to President Jokowi, a land certificate is the legal status of the land ownership rights that must be owned. He also said that it would be pointless to own land if one does not have a certificate as it can lead to a dispute or a conflict. Therefore, President Jokowi said the Government would continue pushing regional offices of the National Land Agency (BPN) to give fast and quick services for the people. Obtaining a land certificate must not be done in years. Ill definitely monitor it to see if there are officials who complicate the process, the President said.

In the meantime, to the residents who received the certificates on that occasion, President Jokowi reminded them to keep the certificates well by means of protecting it with plastic; so if their houses leak, the certificates will not be damaged. You must also have a copy of it. Store the original certificate inside a plastic pouch. Only the copy document that you can carry anywhere, the President said.

Meanwhile, if the residents want to use the land certificate (as collateral) to increase their capital, the President said it is alright to do so; yet, he reminded them to be carefully calculating it. You must be careful with the loan. If you cannot return it, your certificate will be gone. Please be careful. If you have Rp400 million and you spend Rp200 million to buy a car to look great, can you do so? Please dont. If you insist on buying a car, buy a pick-up car or a truck instead, the one with a high productivity,  the President said.