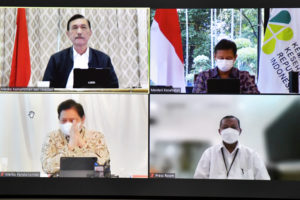 A number of ministers deliver press statement after joining a limited meeting on the evaluation of public activity restrictions (PPKM), through video conference, Monday (8/11). (Photo by: Cabinet Secretariat PR/ Rahmat)

The Government continues to speed up the COVID-19 national vaccination drive to achieve herd immunity.  It is expected that the vaccination coverage to reach 300 million doses by the end of this year.

The statements were made by Minister of Health Budi Gunadi Sadikin in a press statement after joining a limited meeting led by President Joko “Jokowi” Widodo on the evaluation of public activity restrictions (PPKM), Monday (8/11).

According to the data of Ministry of Health on Monday (8/11), the national COVID-19 vaccination rate of the first dose has reached 60.24 percent of the target or around 125.47 million doses, while the second dose stood at 79.34 million doses of 38.10 percent.

On that occasion, Budi also said that the Government will continue to closely observe 155 regencies/municipalities that saw an increasing trend in COVID-19 cases.

“The President has ordered us to pay close attention to the regencies/municipalities particularly that in the provinces of Jakarta, West Java, Central Java, East Java, and East Kalimantan. If there is an increasing trend, it must be handled immediately,” he firmly said.

The Minister went on to say that the Government will also ensure the enforcement of health protocols in the organization of large-scale events and implementation of limited in-person learning.

“Preparation for international events, specifically the G20 [Summit] to be held in Bali is underway. We are also preparing for in-person learning. We ensure that the two agendas do not pose a risk to the increase of COVID-19 cases,” he stated.

In the meantime, President Jokowi called on the Government to remain vigilant against the spread of the new strain of coronavirus, AY.4.2 which appeared to contribute to the increase in the number of COVID-19 cases in European countries.

“The President instructed to pay attention to the G20 host cities,” he said adding that the Ministry will intensify genome sequencing to 1,800 tests monthly and impose stricter health protocols at international borders and entry to Indonesia following detection of AY.4.2 variant in Malaysia. (FID/UN) (RAS/EP)