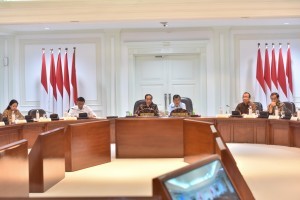 The Government has decided on four priorities in the rescue and recovery efforts following the earthquake and the tsunami that hit Palu and Donggala on Friday (28/9).

“(The rescue team) should reach Donggala, Sigi, and Parigi Moutong,” President Jokowi said in his introductory remarks before a limited cabinet meeting on Palu and Donggala Post-Quake Mitigation Measures at the Presidential Office, Jakarta, Tuesday (2/10).

The President has also instructed Ministry of Public Works and Public Housing to provide heavy equipment from other areas in Central Sulawesi province or by using privately-owned heavy equipment.

The second priority, according to President Jokowi, is medical assistance. The President said that during his visit to the disaster areas, there were no enough tents provided for the victims. Therefore, the President instructed ministries to immediately supply tents to Palu, Donggala, Parigi Moutong, and Sigi.

“TNI hospital ship will be deployed to help the victims, President Jokowi said, adding that he has also instructed Minister of Health to provide more field hospitals and ensure the availability of medicines and paramedics.

The third priority is the handling of affected residents. The President also instructed personnel to provide all evacuation centers with enough food for women, babies and children and instructed the TNI and the Polri to oversee logistic distribution for the victims.

For the record, power outage has caused limited access to water and sanitation

The fourth priority is repairing damaged infrastructure, including airports and roads. In this regard, President Jokowi said that electricity is very urgent for the operation of hospitals and for water supply.  As for the fuel, the President stressed that there should be enough fuel supply for Palu, Donggala, Sigi and Parigi Moutong so that the people can buy fuel.

The President has also instructed Ministry of Public Works and Public Housing to repair the airport runway so that it can operate normally for logistics and evacuation of the victims, while Minister of Transportation has been instructed to make sure that commercial aircraft is able to operate normally.