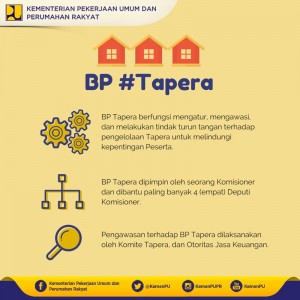 In a bid to support operating and investment activities of Public Housing Savings Management Body (BP Tapera), the Government deems it necessary to provide initial capital to BP Tapera sourced from the State Budget for Fiscal Year 2018.

The initial capital as intended will be in cash and categorized as a separate state asset which is sourced from the State Budget for Fiscal Year 2018, Article 2 paragraph (2,3) of Government Regulation reads.

The Government Regulation Number 57 of 2018 shall apply as of the date of its promulgation on 31 December 2018 which is stipulated by Minister of Law and Human Rights Yasonna H. Laoly.(Pusdatin/ES)